Home Article Is The American Footballer J.J. Watt Dating A Girlfriend Or He Is Secretly Enjoying His Married Life With His Wife?

Is The American Footballer J.J. Watt Dating A Girlfriend Or He Is Secretly Enjoying His Married Life With His Wife? 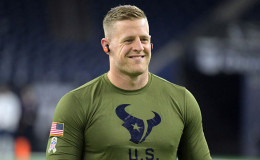 In search of true love, one stumbles upon many possible partners and chances of love but not all are the right ones and when the right one is found, life becomes more beautiful and meaningful.

J.J. Watt is an American football star and he found his love after going through quite a few possible including stars and celebrities.

Today let's take a look at his personal life, including his girlfriend and wife if he has any that is!

J.J. Watt Dating a Girlfriend; Turning Her Into Wife? The Pair Engaged In May 2019

J. J. Watt, 30, is in a relationship with Kealia Ohai, a professional soccer player for the Houston Dash. The pair were first introduced by Watt’s Houston Texans teammate, Brian Cushing, who is married to Ohai’s older sister, Megan. The two began dating quietly for a while before going public with their relationship in early 2017.

While the athletes had kept their romance under wraps, Ohai later confirmed the status of their relationship on the 2 Up Front podcast. Revealing about her relationship, she said.

“The rumors are true. We are dating. I’ve known J.J. for a really long time, and we’ve always been really great friends, and yeah, I’m really proud of him for everything he’s been going through, but it’s been pretty crazy with all the rumors.”

Watt kept quiet about his personal life in the beginning and Kealia had yet to make an appearance on his social media feeds. But recently he posted a picture of Kealia with his mother and grandmother on his Instagram and fans are hoping that this is the next step in their relationship.

The NFL prodigy had shared on “In Depth with Graham Bensinger” in September that his love would have to have a tough exterior to handle the critics.

“I think it’s having the whole world watch your every move, and any female you’re seen with is automatically your girlfriend,”

“Bringing a girl into this life and the scrutiny and the criticism that comes with it no matter how perfect the girl is. people are gonna rip her to shreds because that’s the social media world we live in today.”

And it seems like his search is over and he finally found the one who can handle the chaos of his fame.

Also Read: Ashley Harlan Married her Boyfriend, NFL quarterback in 2011 and shares Three Children with him: See their Marriage Life

And with the way things are going, it shouldn't be a big surprise if he decides to say goodbye to his bachelorhood soon and marry her, converting her into his beloved wife.

J.J. Watt announced engagement to his gorgeous soccer player girlfriend Ohai via Twitter. The pair made their engagement official on Sunday, 26th May 2019.

I love you @JJWatt pic.twitter.com/I7M9Radx66

The pair who's been dating since a long time are very near to start their new life as husband and wife.

J.J. Watt Past Relationships And Affairs

JJ Watt is a really handsome guy and before he found the love of his life, he was constantly with someone and there were quite a few women after him. He kept his personal life on the locks which led the media to start speculating his relationships.

He was linked with any women that he met with which made things more chaotic.

You May Like: Liza Barber married to NFL player Ryan Fitzpatrick; See their Children and Affairs

Among the rumors, few were true and few came into being after he was approached by women. In 2015, Tiffani Thiessen, who played Kelly Kapowski in "SAVED BY THE BELL," posted on Instagram holding a magazine that featured him.

@justinjames99 I heard you were looking for me. I'm in LA catching up on my reading. Btw, good game today. #houstonismysecondhome

This was maybe the most subtle one as there was also a not so subtle one by the playboy model Lindsey Pleas who asked Watt to "slide in her DMs" that stirred up questions. Other than the approaching women he was spotted with many women. He was seen "hanging out" with Zooey Deschanel.

He was in a relationship with tennis star Caroline Wozniacki for some time but that didn't work out on the pair's favor and they parted ways. He was also dating USA soccer star Sydney Leroux and she even visited him in the Pro Bowl in Hawaii.

Watt and Kate Hudson’s recorded a Snapchat of their dinner together back in April which also sparked rumors of a possible romance. There are many rumors regarding him but he moved past all that and found the love of his life.

We are anxiously waiting for the good news about their union and we hope to hear it sooner rather than later.