Home Article Is The American Twitch Streamer CDNThe3rd Dating A Girlfriend Or He Is Secretly Married And Enjoying Life With His Wife?

Is The American Twitch Streamer CDNThe3rd Dating A Girlfriend Or He Is Secretly Married And Enjoying Life With His Wife? 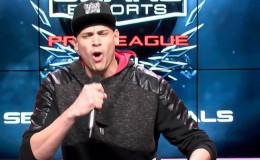 CDNThe3rd is a Twitch streamer who is married to Christina Noreiga. He is living happily with his wife. He had a controversy concerning cheating.

It is said that behind every successful man there is a supportive woman and to have such a woman in one's life is a real blessing. To find the right supportive woman is nothing less than finding a rare Gem.

CDNThe3rd, whose real name is, Caesar Noriega is a Twitch streamer who has found true love and a partner who supports him in his endeavors. It won't be wrong to say that he is a lucky guy to have found it.

Let's take a look at his life and find out about his girlfriend and wife if he has any!

CDNThe3rd Married Life with His Wife; Any Children Yet?

CDNThe3rd is married to his longtime girlfriend, now wife, Christina Noreiga. They are a married couple of 3 years and their wedding ceremony took place in the year 2015. Their family and friends, as well as a few of CDN’s fans, were in the attendance.

Since the couple is in a marital relationship, his wife appears to be supportive as CDNThe3rd’s gaming career soared in the past couple of years.

The couple enjoys each other’s company a lot and it won't be wrong to say that she is the reason behind his recent success. He is very close to her and Christina even made an appearance in his Twitch channel. He also shared a picture of them on Twitter in which we can see their happiness and love for each other clearly.

Before they got married, there was no information about the two dating each other and the news about their wedding was suddenly sprung onto his fans. Although married for three years, their union is yet to see to the birth of any children.

Also Read: Audrina Patridge files for Divorce From her Husband Corey Bohan after getting a restraining order

The couple is living together as a supportive husband and wife and they are living a blissful married life without any rumors of separation or divorce.

Before Christina, there are no details regarding his past affairs and relationships. It would be wrong to say that he doesn't have any past loves but it seems he doesn't want to remember the past in his present.

Don't Miss: Ewan McGregor's Wife Eve Mavrakis spotted without a Wedding Ring! Is the Couple Getting a Divorce?

Like his love life, Caeser tends to stay away from any rumors and controversies in his professional career too. But that doesn't mean there aren't any controversies. The most talked about issue regarding him concerns his phone calls to Epic games during his streaming.

Epic Games are the creator and owner of the popular game, Fortnite. And Caesar calls Epic games in a trolling manner to ask for support items and advantages during the game.

Must Read: Actress Tichina Arnold Dating a Boyfriend After Two Divorces? See Her Past Affairs and Relationship

This stirred up a whirlwind of allegations among other players as the things he requested were the ones he received. It's hard to decide if he just got lucky or if he knew what they were.

Take a look at how CDNThe3rd called Epic Games and requested for advantages!

It divided the community with many claiming its real and others saying he just trolled them. Thing escalated to a point where on Jan 12, 2018, a Reddit thread began for a Petition to ban CDNThe3rd.

It's unclear whether he is just toying with others or if it really is true but it's indecisive without any solid evidence.