Home Article JoAnna Garcia Is Living Happily With Her Husband Nick Swisher And Children; Know About Her Married Life And Relationship

JoAnna Garcia Is Living Happily With Her Husband Nick Swisher And Children; Know About Her Married Life And Relationship 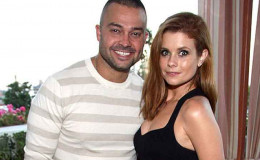 JoAnna Garcia is an actress married to Nick Swisher and they have two daughters. She also dated Trace ayala, Shawn Hatosy and Robert Buckley before she finally met her husband.

Being a celebrity is a curse and a boon for almost every star as fame makes them more vulnerable to baseless rumors and defamation. And finding unconditional love is rare but it seems that the Hollywood actress JoAnna Garcia Swisher has found it.

Although she seems to have her soulmate she did have to go through few men and as an actress of such big caliber, almost every affair of her was on the limelight. The identities of her love interests were brought to light but she did manage to hide the details.

The American actress, JoAnna Garcia is a happily married woman and she tied the knot with her now-husband, Nick Swisher on December 11, 2010, at the Breakers Hotel & Resort in Palm Beach, Florida.

It is said that the pair began dating in 2009 and later got engaged in May 2010. After a few years together, the married couple also welcomed two beautiful daughters, Emerson Jay, born 2003, and Sailor Stevie, born 2016, and it seems the lovebirds are content with their perfect life. While talking about how Nick won her heart, she exclusively told US Weekly in an interview,

“He was really consistent and he was very willing to prove himself. He’s like, ‘I don’t want you to think that I’m some stereotypical athlete, He was very honest about that. He was like, ‘I’m only going to be dating you and you are the only one and until you believe that I’ll be here reminding you of that.’ And that just really struck me like he’s in it to win it.”

“We made a promise to ourselves very early on that we would make sacrifices individually for the greater good of what is now our little family,' At first it was just projects that I probably wouldn’t consider just to be able to spend time together."

"Now that Nick’s retired he is on the road with us. We are just really supportive of each other. We have a lot of respect for each other’s dreams and the largest one being that we both want to have a good family life, a good home life.”

JoAnna not only found true love but she has also found heaven in her home as a family and seeing them can only make people envious of her perfect family. She recently posted a pic of them all four on Instagram on Nick's birthday and it is clear to see that they are happy as anyone can ever be.

May all your wishes come true, @yourboyswish . Lord knows all mine have

It seems the couple have found their soulmate in each other and are content with their present life and it looks like it is safe to say that the couple will not be opting for separation any time soon.

JoAnna Garcia Past Relationships And Affairs

The relationship history of Joanna has been as talked about as her career is. Before her perfect married life, Garcia was engaged with Trace Ayala in 2008. Although, the couple didn't continue their relationship for so long and broke up after three years of relationship in 2009.

The couple had been on an affair since 2006, and they split without a marriage. Trace Ayala is Justin Timberlake`s best friend and business partner.

She then started a relationship with actor Robert Buckley and the couple was seen together on several occasions in 2009 thus giving rise to speculations that he was her boyfriend.

The couple’s relationship, however, did not last long and she started dating her current spouse Nick Swisher. She was also rumored to have dated Shawn Hatosy but this news has not been confirmed and remains a mystery.

Although the identity of her past lovers is known, there aren't many details available regarding her dates and she seems to have been able to keep the info a secret. Regardless of her previous love interests, it's freshening to see that she has found the love of her life.