Home Article Journalist Alicia Quarles married to Michael Ross in 2009. The couple does not have children yet.

Journalist Alicia Quarles married to Michael Ross in 2009. The couple does not have children yet. 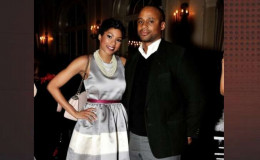 Alicia Quarles is undoubtedly one of the most gorgeous and talented journalists of all time.

She is currently at the age of forty and used to be seen as the New York Correspondent reporting the day’s top news and headlines on E! News.

She is a happily married woman. She got married in 2009 and living a romantic and happy life with her husband Michael since then.

The couple first met when both of them were studying at the University of Southern California and fell in love.

They nearly dated for about five years before getting hitched. The adorable duo finally tied the knot on 21 March 2009.

It has nearly been seven years since they got married and we must say the couple seems very much in love and happy with each other.

#MCM @laquan_smith *Yep, we are prom posing???? I was honored to once again MC @brag_usa's annual gala & help present this gent with the Business Achievement award. His acceptance speech was errrr' thing ????????????

However, they do not have any children yet. Both of them are very busy with their respective career which might be the reason that they are not ready to be a father and mother anytime sooner.

However, she does have a lovely dog named Beckham seems like she loves him very much as she often shares his pictures through her Instagram account.

Well, we all would like to see them as a parent of their newborn child. Let us hope to hear the good news very soon.

Shout out to @LaurenScala4NY for throwing a bomb #Halloween party. The proceeds benefit research… https://t.co/ODO4KZVXb8

Though sources claim that Quarles doesn't have children with her husband, she posted an Instagram image of a girl and a boy child and captioned "me and mine".

Merry Christmas to you and yours from me and mine.

Well, we wish to know more about her family life in days to come.

She began her career as a journalist from Associated Press (AP) where she had an amazingly successful nine-year run where she traveled the world interviewing one of the world’s top personalities.

She worked at Associated Press about nine years where she began as a Producer and later on got promoted to run our East Coast TV entertainment operations.

After that, Alicia became the North America Video Editor and finally the Global Entertainment and Lifestyle Editor.

She worked at AP as the Global Entertainment and Lifestyle Editor. When asked her about the experience she got while working at AP she said, “It was wonderful! I call it the grad school of my life.”

You May Like: Journalist Zoraida Sambolin is a happily married woman. Know about her husband and children

She further said, “I remember painting my own wall. We needed our office painted and I was like “ya know, I’ll just do it myself because it had to get done. I learned how to write for the print wire, how to do radio etc. So, my motto was “say yes to everything.”

Well, it was a dream job of Alicia to work at E! News since her childhood and when she got that opportunity she was very happy and emotional at the same time.

“Opportunity happens when preparation meets luck. And I prepared, worked by buff off, but you have to have that opportunity and somebody to open the door for you. And that’s what E! done for me, so I think it’s those two things coming together.”

However, after working for about three years at the channel she left E! News and whether it was her decision or the channels has not been revealed yet.

Double trouble. Working with my buddy @kevinfrazier for the #elcgala He MCd, while I held it down on the red carpet & turned the tables by interviewing Kev.

Well, whatever may be the reason we would like to wish her and her husband to have a happy and successful life ahead.