Home Article Just Another Day at the Office; Former Playboy Model Karen McDougal Claims of having an Affair with Donald Trump

Just Another Day at the Office; Former Playboy Model Karen McDougal Claims of having an Affair with Donald Trump

Model Karen McDougal Apologizes to Melania Trump for Affair with Donald Trump; She and Trump were involved in the illicit affair in the begining of 2006; They first met in 1998 at the Playboy Mansion; Also, see..

Former Playboy model Karen McDougal claimed she and Donald Trump were involved in an extra-marital affair in 2006.

Affair with yet another women.

Karen McDougal, a former Playboy model in an interview claimed of having an affair with the current President of the United States, Donald Trump.

Well, we are now accustomed to all the ladies coming up and confirming they had an illicit extramarital affair with Trump. 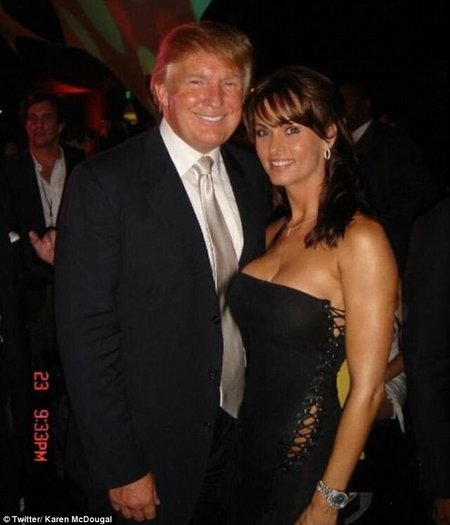 Karen and Donald Trump during the shooting of Celebrity Apprentice
Source: Daily Mail

Karen McDougal while giving an interview to CNN's news anchor, Anderson Cooper she stated how she was in love with him and he also loved her.

But unlike all the other ladies who came forward claiming their affair with Donald, she even asked for forgiveness from Melania Trump.

“What can you say except, I’m sorry? I’m sorry. I wouldn’t want it done to me, I’m sorry. Going through it when I look back where I was back then, I know it’s wrong, I am really sorry for that. I know it’s the wrong thing to do.”

Even though Karen knew Donald was married to Melania, she still went through it, only to regret it later. The duo first met each other in the Playboy mansion while Trump was shooting for Celebrity Apprentice in 1998.

While talking about her relationship with him, she further added,

“There was a real relationship there. There were real feelings between the two of us, not just myself, not just him … Deep inside, I did have a lot of guilt but I still continued.”

Both of them started their affair, three months prior to Trump and Melania son Barron's birth, in the beginning of 2006.

She also claimed how Trump tried to pay her whenever they involve in sexual activity. He would visit her for more than five times a month and sometimes more.

Former Playboy model Karen McDougal is alleging an affair more than a decade ago with Donald Trump. Fighting back tears, she says, "I'm really sorry for that. I know it's a wrong thing to do." https://t.co/qeAjICn2xD pic.twitter.com/49iCJl7TTW

On Tuesday, Karen sued the company that owns National Enquirer. According to the documents obtained by the People Magazine, she filed the lawsuit against them in order to break her silence on her affair with Trump.

The document claimed she was also paid around $150,000 to keep things tight-lipped regarding the 10-month long tryst.