Home Article Kate del Castillo divorced Aaron Diaz in 2011. Is she dating anyone? Or single?

Kate del Castillo divorced Aaron Diaz in 2011. Is she dating anyone? Or single? 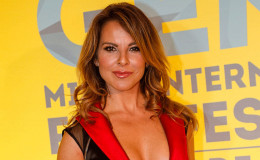 The gorgeous and internationally popular Mexican actress Kate del Castillo has been ruling our hearts for quite a long time now. Her spectacular acting talent, charismatic personality, and drop-dead gorgeous look has managed people go crazy for her.

She is very successful in her professional life. However, Kate's personal life is quite famous and popular among us.

After two years of happy marriage, Del Castillo and Díaz finally decided with a heavy heart to part different ways.

Rumors of marital trouble swirled for months about the couple and among them, one was that the long distances between them due to busy work schedules split them apart.

This was confirmed by an interview with Del Castillo's father Eric Del Castillo who described his daughter's marriage as "not normal" on the Spanish-language program Primero Noticias.

The couple got hitched on 29th August 2009. The wedding took place in Las Vegas, Nevada. The ceremony was endorsed with a religious ceremony which took place at the Episcopal Church in San Miguel de Allende on 5th September 2009.

Castillo, 46, has been married twice before but she told that her second husband, Aron Diaz, was the one whom she loved the most in her life.

The starlet talked to the Latina.com and revealed her former husband Diaz and she still shared love and affection for each other. She said: “Simply, our lives went to different places."

Past Boyfriends And Relationships

She was in a romantic relationship with her boyfriend Emilio Azcarraga Jean who is a son of media mogul Emilio Azcárraga Milmo, and currently, the CEO of the largest mass media company in Latin America, the Televisa Grup.

This information was revealed by the actress's father who told that Azcarraga was always a very formal man, adding that the relationship he has with his daughter was so serious that when it's over it greatly upset the actress in a radio program 'Repor Last word'.

Afterward, Kate married footballer Luis Garcia. They were married for short span of time. Things did not work out between them and on 1 September 2004, they got a divorce.

Since then they have lived a separate life and they do not prefer to talk about each other anymore.

She later fell in love with fellow Mexican actor Aaron Diaz and the boyfriend-girlfriend duo started dating for quite a long time.

The actress finally talked out loud about the divorce with her loving ex-husband and denied all the allegations of the media about cheating on each other.

Despite their breakup, the actress claims that the former couple is still in love with each other and they respect each other greatly. This might be the reason why they exchange lots of positive regards for one another in their social networks, especially Twitter and Instagram.

Kate del Castillo has been divorced from Aaron Diaz since November 2011. Although married for 3 and a half years, they don't have any children. She might also not be dating anyone right now.

However, rumors began to spread over the 4th of July 2016 weekend that Kate del Castillo and Raúl Méndez are secretly spending a lot of time with each other.

An alleged “source” revealed to a Mexican publication that both of them have been keeping their romantic relationship away from the spotlight for a few months.

The actors met while shooting the horror movie “Visitantes,” where they played as husband and wife.

It would not hurt to think that the time they spent together made their relationship grow from a friendship to something romantic but both of them are hesitating to confirm it.

After the rumors started getting crazy, Raúl confessed the truth on Twitter stating that the rumors weren’t true. “People, I recommend reading less gossip and buying more books! Oh, and remember to eat your fruits and veggies,” the actor wrote in Spanish on the social media.

He also told El Siglo de Torreón, that Kate and him are good friends and they have always been and he has not got a chance to meet her due to busy schedules.

Castello sued former officials for $60 million in "moral and material damages" because of something called "political persecution" against her.

Mexican authorities investigated her secret meeting with Sean Penn including former drug lord Joaquin "El Chapo" Guzman in 2015. The meeting was fully intended for her doing a documentary or a movie about Guzman's life.

During a recent interview, she mentioned that she's no longer in touch with Penn and she's sure that he betrayed her.

"Sean Penn apparently helped in the location and detention” of Guzman, now on trial in New York. I was not aware of that situation, and that is why I have always referred to it as a betrayal."

"He behaved very badly because he didn’t protect me and put my life at risk."

She accused prosecutors of leaking information that depicted that she might be associated with drug trafficking or connected to Guzman.