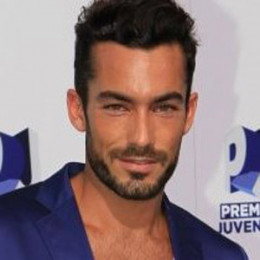 A Mexican actor, singer, and model, Aaron Diaz He made his acting debut in the popular teen drama Clase 406, playing the role of Kike Gonzalez. Apart from acting, Diaz is also a singer and he released his first album titled "Enamorate de mi" in June 2009. His second album self-titled "Aaron Diaz," was released in 2011. Diaz was cast in the ABC thriller series Quantico in the series regular role of photojournalist, Leon Velez.

Talking about his personal life, Diaz is currently married to the co-star of his show El Talisman Lola Ponce. The couple married on 2015 and seems to be doing pretty well together. They have two children together, prior to their marriage. Previously he was married to actress Kate del Castillo. But After a two-year marriage, the couple divorced.

He dated actress Kate del Castillo for few years. The couple got engaged and got married on 29th august, 2009. The wedding took place in Las Vegas, Nevada. The wedding was endorsed with a religious ceremony which took place at the Episcopal Church in San Miguel de Allende on 5th September, 2009. After a two year marriage, the couple separated on July 2011.

Diaz is currently married to girlfriend Lola Ponce whom he dated since 2012. This couple got married on 2015 and seems to be doing pretty well together. They had two children together, prior to their marriage.

She was the first daughter blessed to Lola, before the couple were officially married.

She is the second daughter welcomed by this family.