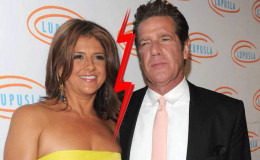 Janie Beggs is popularly known as the ex-wife or "the first wife" of renowned guitarist, singer/songwriter as well as co-founder of "The Eagles" band, Glenn Frey.

Most of you might not have any idea of who is "Janie Beggs" so in this section we will tell you all you need to know about Janie and her personal life.

Glenn Frey, who just passed away at the age of 67 on January 18, 2016, was married twice. When he first met Janie, she was a debutante from Texas, as reported by Huffington Post.

The pair first met during the early 80's in one of his rock shows and sources reported that they instantly fell in love with each other and started dating ever since.

Eventually, the pair decided to tie the knot in the year 1983. The duo was happily married for five long years but unfortunately got divorced in 1988.

The major reason behind their split up was not revealed however, sources reported that they parted ways due to "irreconcilable differences" and usual misunderstandings.

Even though they were not together anymore, Frey often used to dedicate his live performances to Janie referring to her as "Plaintiff" before performing his all-time hit song "Lying Eyes"

Here's a video of Glenn Frey performing live on his song "Lying Eyes."

He started dating Cindy Millican around the same time he separated from his first wife. After two years of dating, the couple married in 1990. They well together with their three children, two sons Deacon Frey, 24 and Otis Frey, 15 and a daughter Taylor Frey, 26.

Janie Beggs was born in Fort Worth, Texas after her great-great-grandfathers moved from Britain to Texas and started one of the successful cattle companies in America, Beggs Cattle Company.

Janie was raised by her mother Janie Famer Beggs and father Ed Farmer Beggs on the Parker County Ranch.

Though her brothers, George IV and Ed Jr. were interested in continuing their family business, Janie, on the other hand, was more passionate about music and art.

After a divorce with Glenn, she kind of disappeared from the media and the music industry.

However, in 2014 Janie was seen attending the Cliburn Gala along with Johnny Reno, Christina Patoski, and Susy Duggins.

Is Janie Beggs Dating Anyone?

According to some sources, Janie is not dating anyone as for now. Other information regarding her second marriage or being romantically involved with any other man has not been revealed.

However, we can assume that Janie has already moved on from her failed marriage and is perhaps living happily with her new family in her hometown Texas.

Death of a Legend: Glenn Frey

The brilliant singer and co-founder of Eagles passed away leaving behind all the melodious memories on January 18th, 2016.

The Sun reported that he had been fighting a courageous battle for the past several months suffering from multiple diseases such as Rheumatoid Arthritis, Acute Ulcerative Colitis, and Pneumonia.

Frey's wife Cindy Millican filed a lawsuit against Mount Sinai Hospital and gastroenterologist Steven Itzkowitz for wrong interpretation of the death of Frey in January 2018.

Well, we express our deepest condolences to the bereaved family of Glenn and we also do hope that Janie shares more about her personal life out and open to the public.