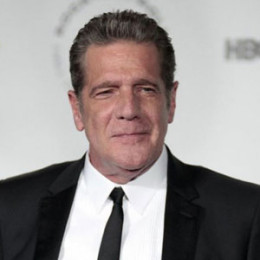 Glenn Frey is a legendary musician, singer plus actor. He is widely known as a member of the band the Eagles. He served the music industry with all his heart when he was alive. Frey was a married man. He married twice in his life. Cindy Millican was his lovely wife, who stood beside him until his last breath.

Glenn Frey was born on 6 November 1948. He is a native of Detroit, Michigan, U.S whereas grew up in Royal Oak, Michigan. He started playing piano at the age of five. Likewise, he developed an interest in music. Later he started playing guitar too.

Frey attended Dondero High School and then went on to graduate from Oakland Community College.

Frey formed a band, Eagles, together with Don Henley. Prior to that, he used to play for different bands. The Eagles band members include Randy Meisner and Bernie Leadon as backing band personnel, Frey as a main vocalist and guitarist, and Don Henley as a Drummer.

He sang lead vocals on several Eagles hits such as Hotel California, Take It Easy, Peaceful Easy Feeling, Tequila Sunrise, Love Will Keep Us Alive, Already Gone, Lyin’ Eyes, New Kid in Town and many others. He cut off the line with eagles in 1980.

Later on, Frey went on to pursue his solo career. In 1982 he released his debut album No Fun Aloud. His songs such as The One You Love, Smuggler’s Blues, Sexy Girl, The Heat Is On, You Belong to the City, True Love, Soul Searchin and Livin Right ranked in the Top 40 hits.

Besides singing and playing guitar Glenn also appeared in the Television show like Miami Vice. Afterward, he got the lead role in the 'Wiseguy' Dead Dog Lives. He also guests starred in Nash Bridges. He then made his appearance in HBO’s Arliss.

He made his first film debut in 1986 in Let’s Get Harry. He played a cameo role in Cameron Crowe’s film Jerry Maguire in 1996.
Glenn has achieved a lot throughout his career. He is the receiver of six Grammy Awards and five American Music Awards.

Cindy Millican was the beautiful wife of Glen. The duo stayed together until Frey’s last breath. Glenn married Cindy in 1990.

The couple first met on the video shoot of Glen where Millican was a choreographer. They have three children together namely Taylor Marie, Deacon Frey, and Otis Frey. He lived a blissful and contented married life when he was alive.

Frey's previous wife was Janie Beggs. He married Janie on June 17, 1983. They stayed as a husband and wife for five long years. They divorced in 1988.

On January 18, 2016, the world lost one of the best singers with the last breath of Glenn. He was battling from rheumatoid since 2000. He was also suffering from acute ulcerative colitis and pneumonia. He died a painful and unnatural death.

Cindy Millican is currently living with her kids after the death of her beloved husband.

The widow of Eagles co-founder Glenn Grey filed a wrongful death suit against Mount Sinai Hospital and the musician's gastrologist.

She accused Mount Sinai and physician Steven Itzkowitz of wrong diagnosis and treatment. He died of complications from rheumatoid arthritis, an inflammatory bowel disease, acute ulcerative colitis, and pneumonia.

"As a result of the foregoing acts of negligence, Glenn Frey was rendered sick, lame and disabled, suffered injuries, pain, mental anguish, was compelled to seek medical care and attention, incurred expenses thereof, and was permanently injured and disabled until the time of his death."

According to the complaint,

"Mount Sinai and Itzkowitz failed to promptly and properly treat [Frey’s] ulcerative colitis and associated symptoms and diseases of the bowel."

As a musician, singer and actor Glenn made a lucrative amount from his multi profession. He held a staggering net worth of $ 70 million.

Cindy Millican was the last wife of Glenn Frey. The couple tied the knot in 1990. She was with him until his last breath,

Taylor Marie is the eldest daughter of late Glenn Frey and his wife Cindy Millican.

Deacon Frey is the oldest son and second child of late Glenn Frey and his wife Cindy Millican.

Otis Frey is the youngest son of late Glenn Frey and his wife Cindy Millican.