Home Article Marjorie Bridges-Woods married her Husband Steve Harvey in 2007. Know about her children and family.

Marjorie Bridges-Woods married her Husband Steve Harvey in 2007. Know about her children and family. 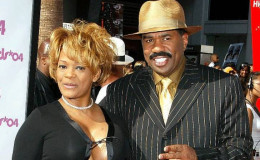 Majorie Bridges and Steve Harvey are married since 2007. After experiencing unsuccessful marriages before both Majorie and Steve are very happy with each other.

The inspiring couple got married back in 2007. The couple is taking care of their 7 children together. Steve Harvey is an American comedian, television host, producer, actor, author, and singer who has been entertaining all of us through his amazing talents and skills.

Steve and Marjorie both met each other at a comedy club in Memphis and fell in love. Both of them were married once, before marrying each other.Let us discuss their relationship in detail.

Sometimes love needs a second chance which is why despite their failed marriages Steve and Marjorie gave each other another chance and tied the knot.

Marjorie divorced her first husband, who is a drug dealer and sentenced to prison. Later on she married Darnell Woods, one of the infamous Woods brother and he was also indicted on drugs charges. The duo eventually filed for divorce and after that Marjorie started dating Steve.

Steve also didn't find the one he was looking for as he was married twice before marrying his current wife Marjorie.

Steve was married to Marcia Harvey pin 1980. The couple has three children between them named Karli, Brandi, and Broderick Steve Jr. Marcia and Steve divorced each other in 1994 due to unknown reason.

Steve married his second wife Mary Lee Harvey in 1996. Steve has a son from this marriage who was named Wynton.

The couple first met each other at a comedy club in Memphis were Steve declared that Marjorie will be his partner forever.

Current Married Life of the couple

Steve and Marjorie tied the knot on June 25, 2007, in Maui. They have been blessed with a daughter named Lori. The couple also takes care of Morgan and Jason, Steve's children from previous marriage.

After such long term married life, Steve definitely knows secrets to a happy married life and he thanks his wife Marjorie for that as she is his inspiration.

Marjorie is known for giving tips to people to live lavishly on a pretty tight budget. She has her own website regarding her fashion journey.

She is also known for her style statement and people all around the globe follow her on her social media account.

Steve and Marjorie are very happy with each other. They are often seen attending many award function or fashion shows together. Marjorie has three kids from her previous marriage. Her net worth is estimated to be $100Million as of 2017.

The duo recently uploaded their picture to their social media account wishing everyone a Merry Christmas.

We wish all the success and happiness for the couple success in their future and we also hope that they stay with each other forever.