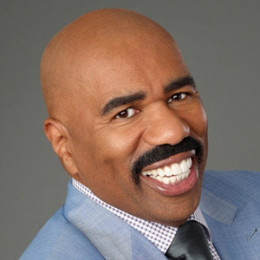 Steve Harvey has been married three times. He first married to Marcia Harvey in 1980 but they divorced in 1994. They have twin daughters Karli and Brandi and son Broderick Steven, Jr. was born in 1991.

Then Steve remarried to Mary Lee Harvey in 1996 but the couple ended their marriage relationship in 2005 they have one son named, Wynton Harvey who was born on July 18, 1997.

Currently, he is married to Marjorie Bridges-Woods in an intimate ceremony. The couple is together since 2007.

Steve Harvey was born as Broderick Stephen Harvey on January 17, 1957, in  Welch, West Virginia to Jesse Harvey, a coal miner, and his wife Eloise Vera. His first name, Broderick was named after the actor Broderick Crawford of the TV series Highway Patrol. He moved to Cleveland, Ohio with his parents and eventually changed his name to Steve Harvey in 2015.

Harvey graduated from Glenville High School in 1974. Soon after completing his high school, he attended Kent State University and West Virginia University and is a member of Omega Psi Phi fraternity. Before starting his professional career, he worked several odd jobs including a boxer, an autoworker, an insurance salesman, a carpet cleaner and a mailman.

Steve has been married three times . He married to first Marcia Harvey in 1980 but they divorced in 1994.

Then Steve remarried to Mary Lee Harvey in 1996 but the couple ended their marriage relationship in 2005.

Currently, he is married to Marjorie Bridges-Woods since 2007. They seems to be very happy with each other so there is no signs of their separation.

They have twin daughters Karli . She is no popular on Tv.

They have twin daughters Brandi. She is popular on tv.

Broderick Steven, Jr. was born in 1991. She has twin sisters and one step brother.

Wynton Harvey was born on July 18, 1997. He has twins sister and one elder brother from his fathers' previous marriage.