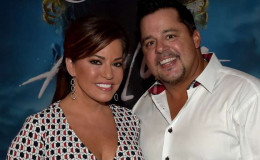 An award-winning news anchor Robin Meade is not only successful in her professional life but also very has a very successful personal life.

She married Tim Yeager in 1993 and still the couple is very much happy and in love with each other.

They are actually celebrating twenty-five years of successful marriage and it is a very deal in Hollywood where the couple getting a divorce has become a new trend nowadays.

The adorable couple first met in college. According to Meade, it was love at first sight for her husband Tim.

When Tim saw her for the first time he fell in love with her and later started dating and got married in 1993 in Northern Ohio.

That smile. Still gets me. Happy 25th anniversary to Mr Cool who still makes my liver quiver. #anniversary

While explaining her wedding day Robin said, “The day we got married, my husband arranged to have 100 red roses placed around our bed as a surprise.”

She further said, “We got married in northern Ohio, and we were going to spend that night back at our condo approximately 100 miles away, before taking off for our honeymoon the next day and there were the flowers lined up perfectly in the master bedroom.”

According to her, it was one of the most romantic moments in her life. Sweet Isn’t it? The best part of their love story is their love for each other has not faded yet.

They still love each other in the same way they used to do when they first met each other which might be the reason behind their successful marriage.

As of now, they are living a very happy and a peaceful married life with no rumors of a divorce or any other misunderstanding between them.

However, the one thing which is missing is their children. They do not have any children yet and both of them have not talked about it yet.

Well, as far as Robin and her husband are happy with each other it really does not matter. When asked about how she has kept her relationship solid and happy till date she answered, “Our schedules keep it fresh!”

She further added, “We don’t see each other during the week. So when we finally bump into each other on Friday nights, It’s like, “Look at you! You’re so cute! How was your week? Great to see you! Let’s go out together!” While it’s not easy, it does keep us yearning for each other!”

Well, now we all know the reason behind their successful marriage. Don’t we?

It's rather a proud moment that Meade and her husband have happily crossed 25 years living as a happily wedded husband and wife.

They celebrated their 25th marriage anniversary sharing their wedding image via an Instagram post on 5th November 2018.

Spending this week off the air with Mr. Cool as we celebrate our 25th wedding anniversary!! Funny how we’ve been married for so long and yet neither one of us has gotten any older

Along with their appearance, their love, romance, and dedication towards one another is evergreen as ever.

Robin officially started her career as a reporter at WMFD-TV in Mansfield, Ohio and then worked as a reporter and anchor at WCMH-TV in Columbus, Ohio.

After working for several networks in the year 2001 she joined HNL as CNN Headline News where she anchored the network’s coverage of Operation Iraqi Freedom and also the Operation Enduring Freedom.

Recommended: Is News anchor Natasha Curry married or single? Know about her husband and children

Currently, she works at HNL as the lead news anchor and hosts the morning show ‘Morning Express with Robin Meade’.

The military may not weed out recruits who used marijuana: https://t.co/HQZ9HexaPY pic.twitter.com/mQLyAji5pM

Apart from her journalism career, she has also been involved in several other professions such as before starting her career she was Miss Ohio.

Similarly, she has also written a book named ‘Moring Sunshine! : How to Radiate Confidence and Feel it Too”.

Likewise, Robin has also released a country music album ‘Brand New Day’ and several other songs. We must say she is a multi-talented person.

During her wonderful career, Robin has also won several prestigious awards because of her hard work and passion.

She has won a regional Emmy Award for her outstanding efforts on covering the tragic collision between a school bus and a train in 1995 that killed nearly more than 24 people.

Similarly, in the year 2002, according to Lycos she became one of the top 20 most renowned television news personalities and also voted as the ‘Sexiest Newscaster’ in 2004 by the playboy.com online poll.