Home Article Relationship between Entrepreneur Khloe Kardashian and Basketball player Tristan Thompson. Are they getting ready for marriage?

Relationship between Entrepreneur Khloe Kardashian and Basketball player Tristan Thompson. Are they getting ready for marriage? 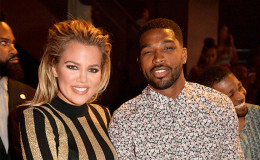 As Khloe moved on from her marriage with the first husband and started dating Tristan publicly, their romance has been no secret. The couple has been spotted on PDA by the media several times.

It was reported that the two enjoy each other’s company a lot and have no sign of slowing down.

The couple has fastened the pace of their relationship and is spending a lot of time together.

On the show 'Keeping up with the Kardashians', Khloe was seen pampering her nieces and nephews. She seems to like children and enjoy their company.

My new niece is absolutely stunning!!! So thankful I was able to land in time to witness this miracle happen! Praise God! ??????

There are rumors all over the internet that Khloe’s baby bump can be noticed and that Tristan and Khloe are having their first child as a couple. However, Khloe denied any rumors of her pregnancy.

A source close to the couple said that the news about Khloe’s pregnancy is said to be fabricated and untrue.

You May Like: Glowing Khloe Kardashian Returns Back To Gym With Kourtney Displaying Cute Baby Bump! Details In With Pictures

In March 2018, she announced that the couple is expecting their first child together. She gave birth to a baby girl True Thompson on 12 April 2018.

A source once said that Khloe and Tristan both fall in love hard and fast and do not know how to slow down. To prove this statement, not long after they started dating, rumors spread around about their baby plans and engagement.

The 32-year-old had a surprise engagement with her 35-year-old boyfriend and planned the wedding date to be early next year.

They were so ahead in the wedding plans that they decided to spend at least 1 million dollars for their wedding and has decided to get married in California.

They probably already have their guest list decided as it was reported that the guest list would consist around 400 people and the entire wedding would be aired on 'Keeping Up with the Kardashians'.

Khloe Kardashian moved on with her life after helping her ex-husband Lamar Odom through his time in the hospital but as Tristan was helping his pregnant ex-girlfriend with her medical appointments, their relationship suffered minor hitch.

Jordan Craig, Tristan’s ex-girlfriend accused Tristan of not paying enough attention to their baby and wanted Khloe to “back off”.

Recommended: Khloe Kardashian and Tristan Thompson Relationship Timeline; Are They Still Together Despite All The Cheating Scandal?

Similarly, just as things were all set for this lovely couple, the internet has suddenly started talking about the end of their relationship.

As all good things come to an end, this relationship has proven to be no exception. It has been reported that Tristan dumped Khloe because he did not appreciate being called a “Kardashian” by his locker room boys.

We hope that Tristan gets over the pressure he felt with that name and this couple finds a way to get back together.