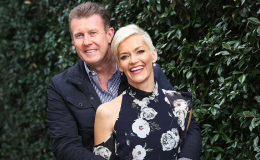 It's, of course, a challenging task for parents to rear and care their kids when both the couple is too busy with their profession. Television news broadcaster Peter Overton who is happily married to his wife Jessica Rowe has everything fulfilled in his family life.

Peter Overton's wife Jessica Rowe who worked in the Studio 10 for years on Network Ten decided to quit her job in March 2018 in order to spend quality time with her husband and children.

Australian journalist Peter Overton has been married to his journalist girlfriend from a rival news channel Jessica Rowe since 2004. The pair is blessed with two children, Allegra Penelope Overton born on January 19, 2007, and Giselle Charlotte Overton born on April 9, 2009. 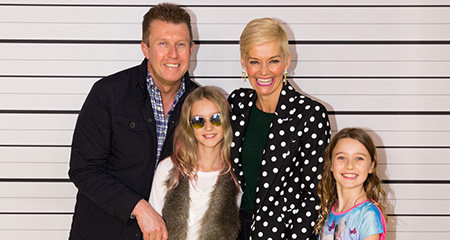 Overton works for Channel Nine in Australia while Rowe dedicated herself for Channel 10. However, their busy career didn't stop them from creating romance as they started dating in 2001. A mutual friend of the power couple suggested Peter take her out but he responded that things will go the way only after Jessica called him first. As expected, the same thing happened in the end.

Channel 9 reporter Overton opens up about his proposal saying,

'So I went back to Jessica’s apartment, and as she got out of the shower – she walked out of the bathroom with a towel around her, sopping wet ­– I said, ‘Will you marry me?’ and gave her this beautiful ring. 'I absolutely knocked her socks off. She didn’t see that coming at a million miles an hour. She said, ‘Of course,’ and screamed, as old Jessica hugged me. It was lovely.'

The duo is still crazy in love even after this age, as they keep their love and romance alive with beautiful date nights and healthy sex life. She even wrote a biography 'Is This My Beautiful Wife?' where she included her lovemaking night against the kitchen bench top.

You May Like: Reporter Abby Huntsman and Jeffrey Bruce Livingston Married life: See their Children and Family.

It is pleasing to know the love life going strong after a few years of marriage and we hope to see it in the future too.

The 53-year-old Overton is a great parent for his kids Allegra and Giselle. He feels his elder daughter is similar to him in personality while the little one Giselle is difficult to handle as she makes him cranky at times. About his daughters, he said,

“The one(Giselle) that makes me cranky. Allegra is like me, very soft, very easy going, sensible – all of that.”

Their marriage looks like a happy one but it wasn't happy always. His wife Jessica Rowe went through mental problems and battled with bipolar disorder after her first time being a mother. See the video for yourself where Overton explains about the situation he and his wife faced during that period.

The problem was huge as she didn't have control over herself and had evil thoughts in her mind. Thankfully she recovered from the situation and later published her first book The Best of Times, The Worst of Times co-written by her mother.

Not just that but Rowe took a crucial decision of her life last year in March 2018. She made up her mind and announced her surprise departure from Studio 10 in order to spend more time with her daughters and husband.

Rowe became emotional as she told her viewers,

"I want to be a more present mother for my girls, Allegra and Giselle. They need their mum. I want to be there in the mornings for them, to take them to school. It is something that I need to do, it is as simple as that."

She revealed that she'd been discussing it quite a long time with her husband as it was the best job she ever had on TV. Though she decided herself to quit the job she was backlashed that she was not voluntarily leaving the show as Channel 10 was planning to fire her for over a year.

Though Rowe was criticized a lot creating a drama regarding her departure from the show, she's yet to reveal full story on the matter.

Get into our website  marriedwiki.com/article for more celebs information.