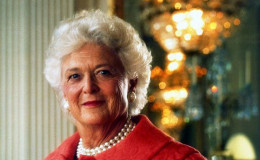 Former First Lady Barbara Bush, unfortunately, Passed Away; She was 92; She was the wife of George H.W. Bush and the mother of George W. Bush; She was suffering from congestive heart failure; Also, see..

Former First lady and renowned Social activist Barbara Bush tragically passed away at the age of 92.

It's a grim day for the United States!

The former First Lady of the United States, Barbara Bush is no longer with us. Following a series of hospital visits in the recent days, Bush couldn't hold longer and passed away in peace.

She was suffering from chronic pulmonary disease and congestive heart failure. Although the reports suggest otherwise, Barbara died of natural causes and old age. She was 92. 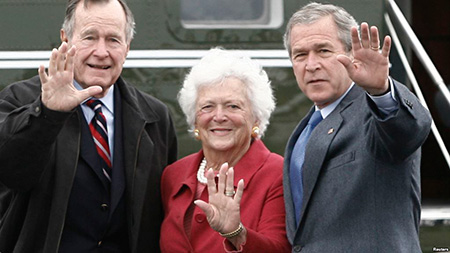 Barbara Bush, the former First Lady of the United States dies at the age of 92
Source: VOA

A spokesman for the Bush family announced the tragic news. The statement further said,

“Following a recent series of hospitalizations, and after consulting her family and doctors, Mrs Bush has decided not to seek additional medical treatment and will instead focus on comfort care.”

Though, she is a mother of six children, her two most prominent sons, former President of the United States, George W. Bush and former Florida governor, Jeb Bush, paid tribute to their late mother.

In a joint statement, they stated,

“Our souls are settled because we know hers was. To us, she was so much more. Mom kept us on our toes and kept us laughing until the end.”

The current President of the United States, Donald Trump along with his wife, Melania Trump also said,

“As a wife, mother, grandmother, military spouse, and former First Lady, Mrs. Bush was an advocate of the American family.”

Former President Barack Obama paid tribute to her and personified her as the rock of the Bush family. Whereas Bill Clinton and his wife, Hillary Clinton called Barbara "a remarkable women."

She was the second women in the history of the United States to see her husband, George H.W. Bush and son George W. Bush sworn in as the President.

The first one was Abigail Adams, who saw her husband John Adams and son, John Quincy Adams becoming the President.

A video depicting her journey as a mother and an activist.

Born in 1925 in New York, she was the true advocate of literacy and even founded her own organization named Barbara Bush Foundation.