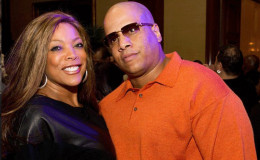 She is a powerful and confident woman who does not hesitate to share her personal facts to the whole world. She has been married since 1997 to Kevin Hunter and has a son together named Kevin Hunter Jr.

The couple got hitched on 1997 after dating for several years. Both of them prefers to live an open life and often shares their personal facts to the world.

Kevin is not only the husband but also works as a manager for his wife Windy. Once she was hired by a Philadelphia urban station and Kevin became her agent.

Well, she knows very well how to mix business with pleasure. The duo even established a reality television company together named ‘Wendy Williams Productions’.

They are also blessed with a son named Kevin Hunter Jr. Like every other Hollywood couple, their marriage also went through various ups and downs but somehow they have managed to still be with others for nineteen years.

No wife in this world will ever forgive her husband if they cheated on them but according to Wendy after she found out that Kevin was cheating on her it made their marriage stronger.

Windy revealed that in the year 2001 she found out her partner was cheating on her only months after the birth of their son.

However, even in that difficult time she acted very matured and tried to solve the problem them. She actually forgave her spouse and made the statement that the cheating made her marriage even stronger. Such a brave girl we must say.

She said, “if you were never caught cheating, take it to your grave, and if you’ve been cheated on, forgive and forget, whether you stay with the person or not.”

She further said, “No I’m not back to the girl that I was before him because when you get stung like that you never go back who you were, only a fool does, But I love him and he loves me.”

In the year 2008, another stir came in their marriage when one of Wendy’s staff accused Hunter of sexual harassment.

A lady named Nicole Spence who used to work for Wendy as a talent booker for ‘The Wendy Williams Experience’ claimed Kevin demanded sex from her many times and filed a sexual-harassment lawsuit against both Wendy and Kevin.

The accuser also reported that it was Wendy herself who used to encourage her to go along with her husband’s alleged sexual propositions.

However, the pair denied all the charges and the case remained unsolved.

Wendy gave birth to her son in the year 2001 and there is no doubt that she loves him unconditionally but it looks like her son is not very close to his mom.

While hosting one of the episodes of her show Wendy suddenly broke down in tears and said, “What I discovered this weekend is that my son doesn’t like me anymore.”

During the show, she was discussing Madonna’s controversial tweet in support of her son Rocco and suddenly she started sobbing.

However, He is close to his father. While describing their relationship she said, “He’s a father, he’s a buddy, they talk sneakers, they go for haircuts, they speed off in the cars and I’m just left there feeling like, ‘Why you so pissed?’ I’m not pissed, I’m a mom!”

Whatever maybe the reason behind their differences we just hope this mother-son duo soon solve their problems and stay happy together.

Wendy Williams and Kevin Hunter: Are They Getting A Divorce?

Well, according to the current news the couple is having a tough time in their marriage. Things are going so intense that she is even thinking of firing her manager-husband from her show.

One of the insiders said, “Kevin makes all the decisions and has become more and more controlling as the show has become a success. He insists that all show questions be run by him”.

Along with this, they are also facing problems in their marriage which are why they might get a divorce soon.
If the news is true then it will be another heartbreaking divorce of the popular Hollywood couple.

ASK WENDY: Should she just go with it? https://t.co/uXrWYfdcm7 pic.twitter.com/XWVsTEtQ8N

After weeks being absent on the show, Williams announced that she won't return to her show anytime soon.

As she's struggling with the complications of her Graves' Disease and an ongoing surgery for a shoulder fracture, she extended her break as she planned to returned back in the show on 7th January 2019.

As per the note obtained from her family,

"Over the past few days, Wendy has experienced complications regarding her Graves’ Disease that will require treatment. Wendy will be under the strict supervision of her physicians, and as part of her care, there will be significant time spent in the hospital. Despite her strong desire to return, she is taking a necessary, extended break from her show to focus on her personal and physical well-being."

Williams disclosed about her Graves' disease in February 2018.