Home Article Know about Baxter Neal Helson, the ex-husband of Tish Cyrus. What are they doing now?

Know about Baxter Neal Helson, the ex-husband of Tish Cyrus. What are they doing now? 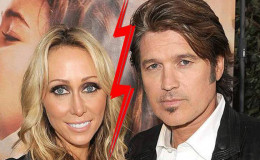 Baxter Neal Helson is quite famous for being the ex-husband of American film producer and mother of singer Miley Cyrus, Tish Cyrus. Their relationship started off way early when they were just teens and the pair even got married, giving birth to two kids!! Quite shocking, isn't it?

Most of you might not have any idea about Baxter and might be thinking that Tish has only married Country Singer/actor Billy Ray Cyrus, but that's not the whole story. Let's dig up all the information about Tish and her ex-husband Baxter in this section.

Leticia Finley, now known as Tish Cyrus married the former drummer from Ashland, Baxter at the young age of 19. Sources report that Tish was heavily pregnant with her first child when the duo tied the knots.

Sources report that Tish was heavily pregnant with her first child when the duo tied the knot.

Also, we came to know that the pair used to work together as a musician and a drummer in their "rock 'n' roll groupie". Eventually, they started dating and the love affair soon transformed into a holy matrimony.

However, their relationship did not last long and they decided to get divorced after nearly two years of their marriage.

The major reason behind their split up is not known, however, rumor has that Tish was having an affair with the hot country singer and actor Billy Ray Cyrus and she was cheating on her husband Baxter.

Finally, the relationship ended and Baxter was out of Tish's life. Besides, after their separation, Baxter has maintained a very low profile and details about him or what's he doing currently is nowhere to be found on the web.

We assume he has already moved on and is living a happy life.

The duo have a child together

Baxter and Tish were expecting a child when they got married. They gave birth to their first baby daughter Brandi Cyrus on 26th of May 1987 in Nashville, Tennesse. When the parents

When the parents split, Brandi was adopted by her step-father, Billy Ray Cyrus. She is currently engaged in a band, named 'Frank and Derol' as a lead guitarist.

Tish started dating the hit country singer and actor Billy Ray Cyrus soon after her divorce and the duo got married on December 28, 1993.

Besides, the couple has also adopted step-daughter "Brandi" from Tish's previous marriage.

Tish spends a lot of time with her family and seems like they are really happy together,

The duo, Tish, and Billy have been together for 25 years and every time we see them, we get inspired by this amazing couple.

She is a working mom and she never miss out any chance of her spending time with her children. Just look at them! So adorable!