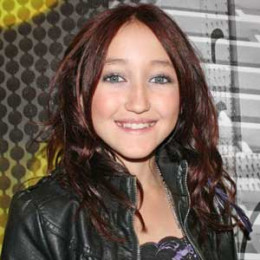 Noah Cyrus is the rising American actress and singer is the huge attraction of youths of today. She started her career at an early age. She achieved much more right from her early age. Noah is also an animal lover so protest against using animals in practical labs of schools and colleges. Cyrus is single now but there are many rumors about her and Paris Brosnan.

The beautiful, Noah was born on 8th January 2000 in Nashville, Tennessee, United States. She was born to mother Tish Finley Cyrus and father, Billy Ray Cyrus. Her father, Billy is a recognized singer and her mother is an American actress. Cyrus' parents had an on-off kind of relationship. Her grandfather, Ronald Ray Cyrus was a Democratic politician of Kentucky.

She grew up with five siblings. They are Miley Cyrus (a ravishing pop singer and actress), Brandi (a journalist), Trace (vocalist and guitarist for the Metro Station), Braison (a fashion model), and Christopher (elder half-brother). The education qualification of Noah is not revealed to the media so, there is no such information.

Even though she is from musical background family; she chose the acting field to build up her career. At the age of 3, Cyrus acted as Gracie Hebert in the television show called, Doc for six episodes. In 2008 she gave her voice to English version animated movie, Ponyo. After that Cyrus played the tiny role of background dancer in Hannah Montana for almost six episodes. She also worked in a film named, Mostly Ghost, a horror comedy fantasy movie.

Besides acting, Noah contributed to the singing field too. She sang a song for a movie with Frankie Jonas. In 2016, Cyrus announced to link a record deal with Barry Weiss. Her debuted song was Make Me Cry featuring Labrinth, who had already worked with famous celebs- Usher, Rihanna, and The Weeknd. As per a TMZ report, in 2016, she signed a six-figure record deal with a $1.5 million advance payment for the second one if the first goes well.

Recently she performed at the MTV Movie &TV Awards 2017. It was her first live performance at the MTV awards and she sang her newly released single Stay Together.

Cyrus is single now with lots of rumors and controversies. Noah Cyrus also started her dating from an early age. In 2007 she was in relation with Frankie Jonas and broke up after two years in 2009.

There are rumors about her relationship with Paris Brosnan, the son of Pierce Brosnan ( an Irish actor and film producer). Cyrus and Brosnan posted many photos together on Instagram which raised questions about him being her boyfriend. But they neither denied nor accepted the relationship. But she claims to be single.

The emerging star, Noah has an estimated annual income of $1600, 000 and an estimated net worth of $4 million. She is earning huge from the acting field, singing, and many other endorsements too. Noah lives a high profile life and spends a huge amount on her dresses as well.

As per the photos posted on Instagram, she was caught driving a new Jeep Wrangler without a driving permit. She has a huge fan following of 2.9 million followers on Instagram and 570k followers on Twitter.