Home Article Who is Aaron Tveit Dating Currently? Detail About his Relationship and Dating History

Who is Aaron Tveit Dating Currently? Detail About his Relationship and Dating History 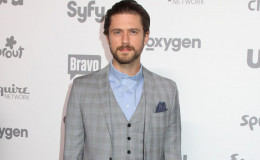 Aaron Tveit is an American actor famous for the movie Grease. Learn about Tveit's personal life in this article.

A celebrity is someone that people inspire to be as they are seen as perfect by their fans, and since they are the ones that make a superstar, it's only suitable for them to know about their idols.

But this becomes a problem for the star as it leads to rumours and speculations regarding his everyday activities. Les Miserables star Aaron Tveit is also facing this with his fans and the media, that want every detail regarding his life.

Let's look at his personal life and find out if he has relationship status and girlfriend rumours!

Aaron Tveit is romantically involved with his longtime girlfriend, Ericka Hunter. As per Just Jared, on Saturday, May 8, the 6ft tall actor, most well-known for his work on Broadway and in the American television series Graceland, posted on his social media wishing Ericka a happy birthday. "This is my favourite photograph of you. My favourite smile. Wishing @erickahunter a very happy birthday! I love you!"

Ericka is also a performer in musical theatre, and she has been co-starring in Moulin Rouge on Broadway alongside Aaron. Although Aaron and Ericka have been dating for several years, they kept their relationship private for a long time.

Aaron Tveit's Past Relationships And Rumors; Dated His Broadway Co-Star

Aaron Tveit is low-key regarding his love life, but in a 2013 interview with the New York Post, he revealed that he had a girlfriend.

Although there isn't much detail, there is info that Tveit dated theatre actress Jacqui Polk from 2005 to 2008. They met while they were working in the Broadway production of Hairspray.

They began dating two months after they met on tour, and Aaron agreed they were an item.

In a February 2008 interview, Tveit talked about it and revealed that they dated for more than two years. His secrecy regarding his private life has kept the media thirsty for more, giving rise to millions more rumours and speculations.

Among the rumours, there was news considering his sexual preference. Speculation on the singer's sexuality caught fire that he is gay. The rumours went ahead to dig up his alleged gay partner Darren Criss. He is a fellow actor, and the news claims they are involved in a romantic relationship.

But the rumours were quickly put to rest, and things were cleared, but still, Aaron didn't reveal anything about his affairs.

You May Also Like: Darren Criss and his Girlfriend Mia Swier have been in a Relationship since 2010. Know their Dating Life

One can only hope to get anything out of him and keep on the lookout.