Home Article Who is Robert Redford's Daughter?Detail About Their Family Life

Who is Robert Redford's Daughter?Detail About Their Family Life 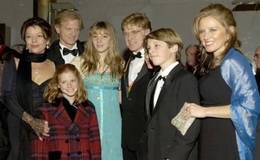 With more than five decades of a brilliant acting career, veteran actor Robert Redford today stands with one failed marriage, three children and many beautiful grandchildren. Everything you need to know about Redfords' ever-growing family.

Robert Redford's Life In A Nutshell

Best known for his acting credit in the Academy Award-nominated film, The Way We Were, the legendary Hollywood icon Robert Redford has honestly survived some of the toughest incidents a man can encounter during a lifetime.

Death of a newborn child, the murder of his daughter's fiance, a grandchild with dyslexia can be considered some of the highlights. Redford who is today married to his second wife of a German national, Sibylle Szaggars shares all of his four children with former wife, Lola Van Wagenen, a historian and author of the book; Sister-Wives and Suffragists: Polygamy and the Politics of Woman Suffrage 1970-1896. 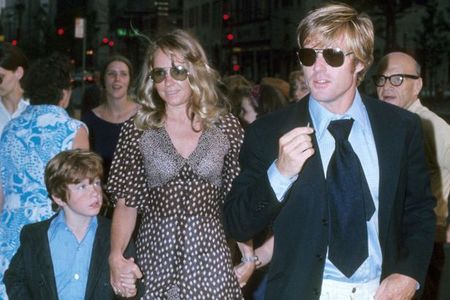 Both Redford and his then-spouse; Wagenen, who grew up in a Mormon family immediately developed feelings for each other instantly after they met in the late 50s in New York. And not long after they fell in love, the young love birds decided to elope to Las Vegas in less than a year when Robert was 22 and Lola was only 19.

Not to mention, Lola even quit college to start this new chapter of her life with this young fella she was madly in love with. On the other side, the couple moved to New York whilst Redford attended the American Academy of Dramatic Arts and was on his career breakthrough phase.

Matter of fact, it was Lola who guided Robert to the right path and the right person the actor found his solace in after the loss of his mother, Martha Hart Redford, who tragically passed away at only 40 in 1955 after going into labor with a stillborn twin.

And, in consequence, then-eighteen years old Robert began drinking, stealing, breaking into people's houses at night and was expelled from the University of Colorado. Death of his mother isn't the only thing Robert had to endure the pain with in his early life, but the sudden death of his uncle too. 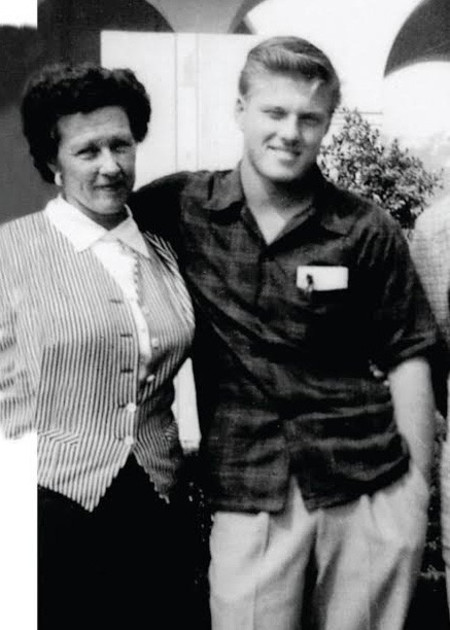 Robert's uncle who ultimately played a part of a role model in his life was the one to teach him four different languages and sports. Redford's uncle David died in a car accident along with General Patton and his armies in Germany in 1945.

But, how wonderful, it would have been if Martha and uncle David had lived longer to see their son and nephew turn to the superstar he is today. Well, what about Robert's father? His name was Charles Redford, a simple man who worked as a milkman and worked a lot for numerous hours whilst raising Robert and his brother William Redford. He died in 1n April 1991 at the age of 74.

And, not even in less than a year of marrying in 1958, Robert Redford and his former wife welcomed their first child who they named Scott Redford on 1st September 1959. But sadly, on 17th November, Robert and his then-wife put down their son at his grave at the Pravo City Cemetery in Utah after dying of sudden infant death syndrome. 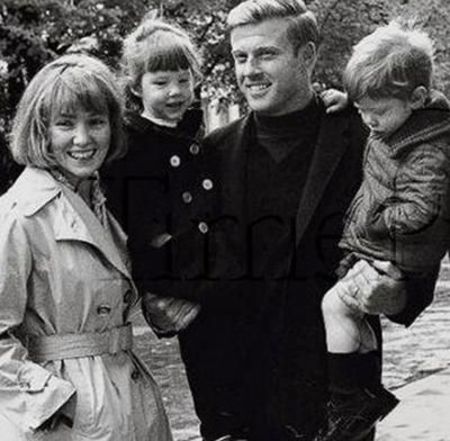 A rare picture of Robert Redford and his first wife, Lola, and their children, Jamie and Shauna Redford. SOURCE: Pinterest

Speaking of his son's death, Robert has openly spoken of blaming himself and Lola for not knowing about a lot of things as young parents whilst they were also struggling financially with his acting career which didn't pay him well at the time.

Three years later, the environmentalist who supports Native Americans right and despises the current president of the United States, Donald Trump, and his wife couldn't be more delighted on the news that Lola was pregnant again for the third time with a son.

Unfortunately, their happiness turned to horror when Lola had to give birth to their third child, James Redford, on 5th May 1962 seven weeks premature from his due date to be born. This was because Jamie suffered from hazard breathing problems. 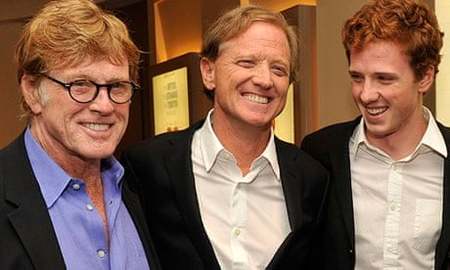 Robert Redford alongside son James Redford and grandson Dylan Redford at teh premiere of The Big Picture in new York. SOURCE: The Guardian

The hardworking actor gave everything from his side to raise his son who grew up just fine. James who graduated from Dalton School and studied literature from the University of Colorado & Northwestern University secured a bright career after seemingly following the footsteps of his father in the entertainment field. The only difference being Jamie works as a director, writer, and filmmaker.

James, however, didn't have much luck with his health throughout his life. Diagnosed with such dangerous disease as ulcerative colitis in his teenage years that included symptoms such as internal bleeding, fever, and weight loss, the condition worsened when the Paper Tigers director was in his thirties and had to remove his colon and undergo two liver transplant surgeries in 1993 after he became extremely ill.

Luckily, by the grace of God, his second operation went successful after the first one failed. Today, James, who is married to wife Kyle Redford with whom he shares two children including daughter Lena Redford and Dylan Redford, is the founder of James Redford Institute for Transplant Awareness. James even worked with HBO on a documentary called The Kindness of Strangers on the people affected by liver transplants. 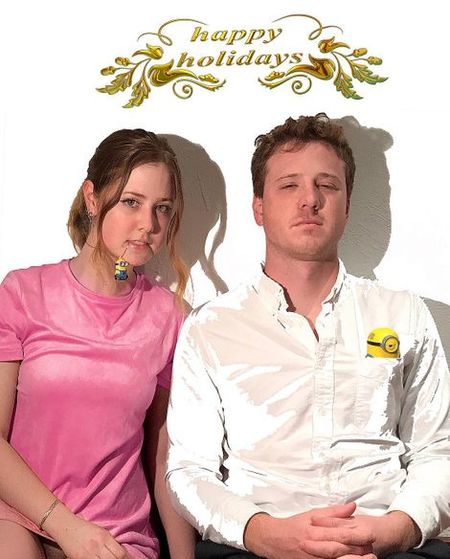 On the other side, Robert's grandson, Dylan is a victim of dyslexia who couldn't read or write until he was ten years old. And his father, Dylan once again made a critically acclaimed documentary called The Big Picture manifesting the life of his son and people living with the condition.

Dylan who was told that he was either going to be a millionaire or end up in jail by his principal after quitting school at 15 attended the prestigious Middlebury College in Vermont. Both of James' kids are active on social media such as Instagram.

The former duo's first daughter named Shauna Redford was born the following year of Scott's death on 15th November 1960 after finally coping with the trauma led by his death and being ready to start a family. Shauna, who is also involved as an artist is a painter by profession.

The elder daughter of Shauna is married to tv personality, author and reporter, Eric Schlosser with whom she exchanged the marital vows in 1985, according to Celebs Closet. The couple also shares two children altogether, namely Mica Schlosser and Conor Schlosser. 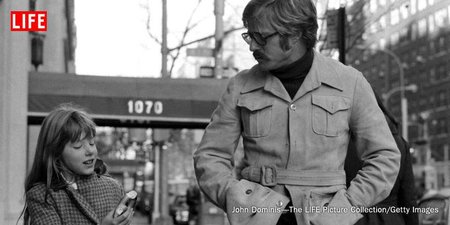 Sadly, tragedy seems to be a fan of Robert Redford's family. Daughter Shauna, as well, had to endure some painful incidents in her early twenties. To get straight to the point, Shauna's college sweetheart was shot in the head to death in the year 1983 when both of them were students at the University of Colorado.

Unable to bear such excruciating agony, Shauna even dropped out of college. On the other side, the murder case of her boyfriend Sid Wells is still not solved to this day. As per reports, it stated that Shauna and Sid were engaged too. 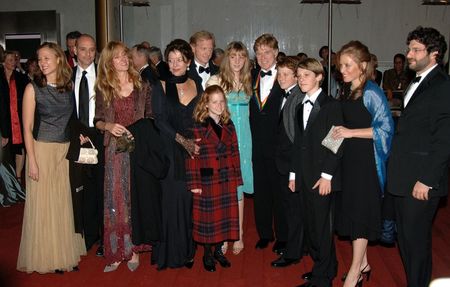 Robert Redford at an event in 2019 surrounded by his beautiful grandchildren and children. SOURCE: Pinterest

As a father, Robert describes the horrifying incident in his family's life, claiming that there are so many 'hits' that broke his family that he prefers to not speak of it in the public for the sake of his children.

Last but not the least, Robert and Lola's youngest child, a daughter includes none other than Amy Redford who the celebrity ex-pair welcomed ten years later of Shauna's birth on 22nd October 1970. Speaking of Shauna's career, she is an actress, producer, and director, better known for her contribution to The Guitar, This Revolution and When I Find The Ocean.

Speaking of Amy's personal life, she was previously married to Award-nominated screenwriter Matt August with whom she also shares a child, a daughter named Eden August. Eden was born in 2008. Unlike Robert's other children's married life, Amy's lasted for only four years from 200 till 2004. 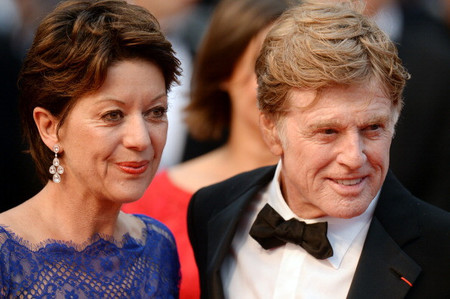 Robert Redford and his second wife, Sibylle Szaggars, who's of a German national. SOURCE: Closer Weekly

Robert and his wife Lola, now a historian and producer also parted their ways in 1985 after nearly 27 years of togetherness. Lola then married second husband, George Burrill, after seventeen years of the divorce in 2002. As for Robert, he resides in between Los Angeles and Germany with Sybylle whom he married in Louis C. Jacob Hotel.

In the meantime, all children and grandchildren of Robert Redford are proud of their grandfather and his achievements. Matter of fact, despite their busy schedules, all of them once attended to support Redford at the Film Society of Lincoln Centre Chaplin Awards where he was honored.

View more celebrities Biographies as well as Gossips on Marriedwiki.com.