Home Article Who is Sunlen Serfaty's husband? Know about their married life

Who is Sunlen Serfaty's husband? Know about their married life 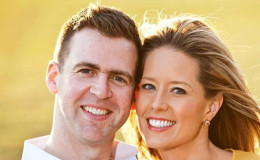 Sunlen Miller, who is now famously known as Sunlen Serfaty, is a popular and versatile news correspondent working with CNN based in Washington, D.C. Sunlen is a happily married woman and her husband is Alexis Leigh Serfaty.

Sunlen and Alexis have been married for three years and there has been no looking back for the couple since then. Both the couple loves each other unconditionally and are having the most wonderful times of their lives.

So, today we will reveal all the stories of how the two lovebirds met, fell in love and ended up getting married.

Sunlen Serfaty and Alexis: How The Couple First Met?

It was August 2006, when Alexis, then 25, who has just moved back to Washington, first saw Sunlen at a political fundraiser program in Rose Park, Georgetown.

Instantly, he got attracted towards the tall, gorgeous woman and he got to finally talk with her after the introduction from their mutual friends.

As the conversation started to flow from both sides, both were impressed by their first meet and flirtatious conversation. Soon after that, Alexis asked Sunlen out for dinner to which she agreed and has their first official date at Firefly in Dupont.

Their first date was at Firefly, where they did a lot of serious talks about their families, passion, and career aspiration, surprisingly ended up without a kiss.

On an interview with Washington's Post, Alexis told reporters that it took four dates to finally kiss Sunlen. Alex added with much emotion saying:

I knew it was now or never. As we walked down Connecticut Avenue...on our way to dinner, I stopped her suddenly and pulled her close to me...and we finally kissed!

Sunlen recalls that memory as a very sweet and passionate moment of their life.

Despite their magical chemistry and countless dates, they were not in a committed relationship. Soon, Sunlen got an incredible opportunity to cover Barack Obama's presidential campaign for ABC News, she packed up and went away for more than a year.

Alexis and Sunlen remained barely in touch during the whole time. After Obama's victory, Sunlen got back to Washington and out of nowhere, she spotted Alexis in the same gym center.

Call it fate or coincidence, but both felt the same chemistry and heat between them.

After loads of casual dates and hangouts, Sunlen asked Alexis out on a date on Valentine's Day. The meeting turned out to be amazing and they spend their date sipping a martini on the cozy couch at Tabard Inn, talking and knowing each other more.

Sunlen told the sources that the date made them feel more deeply for each other and they realized they could make this relation something really wonderful.

Their relationship grew stronger day by day as they found each other understanding and loyal. They went out a number of times on vacation and romantic outings and also met each others family members.

Finally, the couple decided to get married at the Rose Park in Georgetown, where they first met and organized an official ceremony at the historic Anderson House on August 3, 2013. 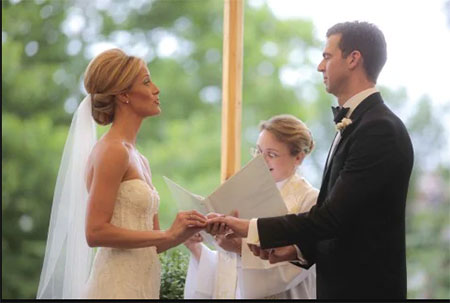 CAPTION: Sunlen and Alexis exchanging rings on their wedding on Aug 3, 2013,
SOURCE: The Washington Post

The duo has happily celebrated their three-year marriage anniversary and is looking forward to starting a wonderful family together.

The pair welcomed their first child; a baby daughter in the last of May 2017. See the gorgeous mother posing with her newborn baby:

Back from maternity leave today & back on the Hill. Thanks to @cnn for a great summer w/ this little one! pic.twitter.com/eLhQVUKSKE

The lovely husband and wife duo will now experience the blissful feeling of parenthood with their daughter Roosevelt Jolie Serfaty.

Alexis, 38, who is famous for being the better half, husband of Emmy award-winning Journalist, Sunlen Serfaty, works as a policy adviser for the Department of Transportation in Washington.

He completed his graduation from College of William and Marry and got his Master's degree in Political Science from the Paris Institute of Political Studios.

The loving and supporting partner is the son of Gail F. Serfaty and Simon H. Serfaty of Washington.

The groom’s mother retired as the director overseeing the operations of the diplomatic reception rooms at the State Department in Washington, and as the curator of the Blair House residence.

His father, a senior professor of United States foreign policy at Old Dominion University in Norfolk, Va., also holds the Zbigniew Brzezinski Emeritus Chair in Global Security and Geopolitics at the Center for Strategic and International Studies in Washington.