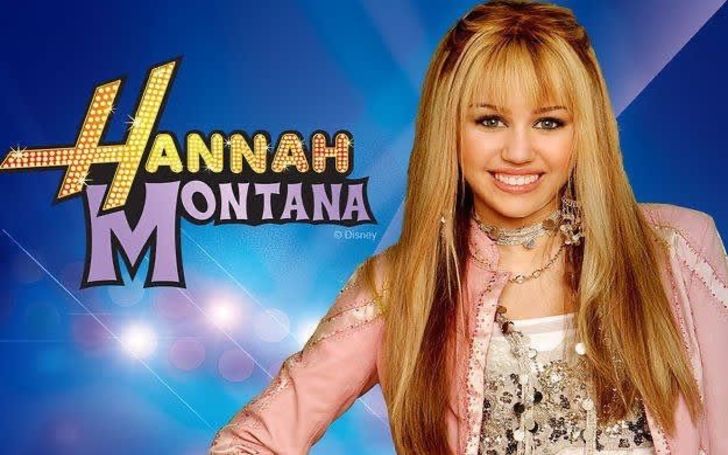 It's been fifteen years since Disney dropped its greatest show ever. And, on the anniversary of the hit Hannah Montana show, its lead star Miley Cyrus paid a long and emotional tribute. Before you go any further, don't forget to grab your tissues while you can.

Hannah Montana fans are reminiscing the good old days when they would tune into Disney Channel to watch a girl live two lives of a normal teenager and a Popstar. Well, why?

Because it's the freaking fifteenth anniversary of the hit Disney show, the one and only Hannah Montana which starred Miley Cyrus, Billy Ray Cyrus, Emily Osment, Jason Earles, and Mitchel Musso in lead roles.

And, Cyrus who played Miley Stewart and Hannah Montana on the show made sure to give fans something special to celebrate the memory of the show on its fifteenth anniversary.

As a matter of fact, the 28 years old singer shared lengthy paragraphs with emotional messages on social media to remember and thank Disney for changing her and castmates' life forever.

In her own words, Cyrus kicked off her post with, "Hi Hannah, It's been a while. 15 years to be exact,"

The statement was then followed by, "Since the first time I slid those blonde bangs over my forehead in the best attempt to conceal my identity. Then slipped into a puke pink terry cloth robe with a bedazzled HM over the [heart]. I didn’t know then… that is where you would live forever," 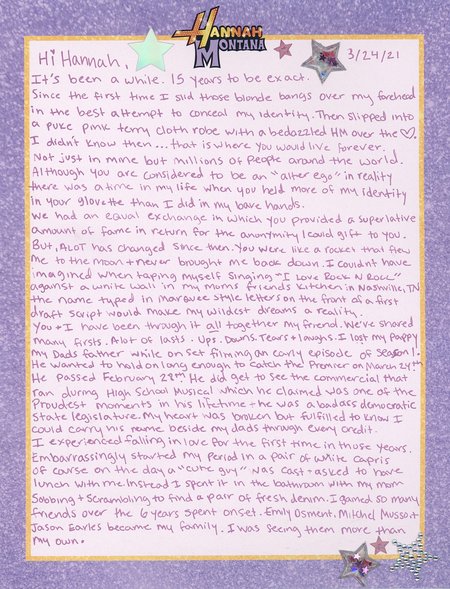 Cyrus added, "Not just in mine but millions of people around the world. Although you are considered to be an ‘alter ego’ in reality there was a time in my life when you held more of my identity in your glovette than I did in my bare hands."

Likewise, the Grammy-nominated singer also talked about how there have many changes as she went on to write, "We had an equal exchange in which you provided a superlative amount of fame in return for the anonymity I could gift to you."

"You were like a rocket that flew to the moon + never brought me back down. I couldnt have imagined when taping myself singing ‘I love Rock N Roll’ against a white wall in my moms friends kitchen in Nashville, TN the name typed in marquee style letters on the front of a first draft script would make my wildest dreams a reality," said Cyrus. 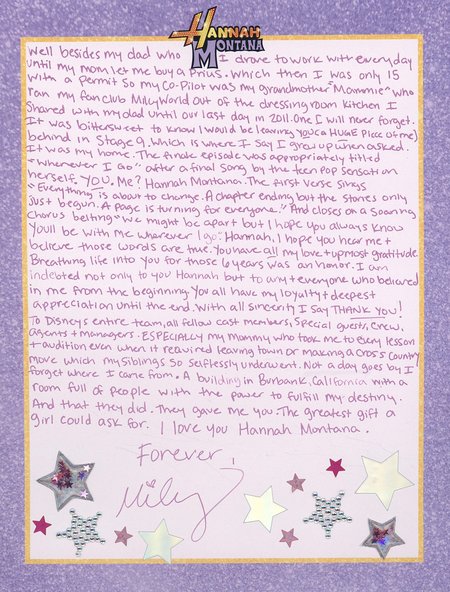 Of course, the Wrecking Ball hitmaker also thanked Disney, the entire team behind Hannah Montana, and fellow cast members for making the show happen. And, before penning down her words, Cyrus concluded with,

"Not a day goes by I forget where I came from. A building in Burbank, California with a room full of people with the power to fulfill my destiny. And that they did. They gave me you. The greatest gift a girl could ask for. I love you Hannah Montana. Forever, Miley."