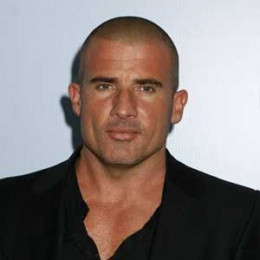 English actor, Dominic Purcell became a TV star in Australia before debuting in America as the title character in John Doe (2002).In 2007 he won AACTA Awards in the category of Best Actor for his role in the series Prison Break. Moreover, he is well known for portraying Mick Rory / Heat Wave in CW's The Flash and Legends of Tomorrow.

His mother comes from Irish descent, and his father from a Norwegian of French descent. He grew up with his siblings Damian Purcell, Jaime Purcell, Patrick Purcell, and Marie-Therese Purcell.

In 1972, the Purcell family moved to Bondi, New South Wales, and later to Western Sydney. In 2000, he won the Green Card lottery and shifted to Los Angeles with his family.

Later he attended the Australian Theatre for Young People and also enrolled at the Western Australian Academy of Performing Arts, where he studied with Hugh Jackman.

Dominic Purcell began his career as a landscape gardener. His debut film role was as Troy Nelson in the 1999 movie 'First Daughter.'

He also appeared in the 2002 film 'Equilibrium' and the 2003 film 'Visitors.' His popular movies are Three Way, Blade: Trinity, The Gravedancers, Blood Creek, House of the Rising Sun and most recently as David Hendrix in the 2015 movie Gridlocked.

Apart from films, he has also made appearances on many television roles. He performed as Constable Rogers in 'Home and Away' and also appeared on the series 'Raw Fm.'

He has also performed in a recurring role in 'The Flash' and portrays the role of Mick Rory on 'Legends of Tomorrow.'

Purcell gained wide recognition for his role in Prison Break where he played as the brother of Micheal Scofield portrayed by Wentworth Miller. Its fifth season was recently released on April 4, 2017. While filming for the current season, he suffered severe injuries on set in Morocco, after a misplaced iron bar fell onto his head on 1st June 2016.

Dominic Purcell previously dated Rebecca Williamson in August 1997. After dating for a year, the pair got married on the 1st of August 1998.

On 12th August 1999, Rebecca gave birth to a son Joseph Purcell, and on 30th January 2001, their daughter Audrey Purcell was born. Then on 7th July 2003, she gave birth to twins a son Augustus Purcell and a daughter Lily-Rose Purcell.

But after ten years of marital relationship, the couple divorced on 22nd October 2008.

Purcell then started dating AnnaLynne McCord, a former 90210 star in 2011. In 2014, the couple announced a friendly split but rekindled their romance a year later. The couple separated in 2016.

For his acting credits, Dominic Purcell has a net worth of a whopping 2 million dollars, and his salary is on the rise too.

Dominic Purcell previously dated Rebecca Williamson in August 1997. The pair dated for a year and eventually tied the knot on the 1st of August 1998 and divorced on 22nd October 2008.

On 30th January 2001, a daughter Audrey Purcell was born.

On 7th July 2003, Rebecca gave birth to twins and one of them is a son, Augustus Purcell

The other twin is a daughter, Lily-Rose Purcell.