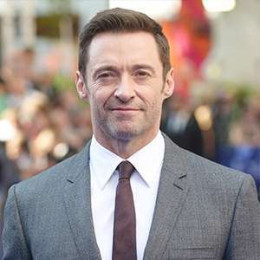 Synopsis: Hugh Jackman rose to fame through his role as Wolverine and Logan in the X-men. He since then has gone on to win various awards including-Golden Globe Award, Special Tony Award, Primetime Emmy Award, MTV Award, People's Choice Award and much more, for his brilliant acting.

He is also known for the German-American-British comedy-drama film, Eddie the Eagle. Besides an actor, he is also a singer, multi-instrumental player and producer too.

Hugh Jackman was born on 12th October 1968 in Sydney, to mother, Grace McNeil, and father, Christopher John Jackman, a trained Cambridge accountant. His parents were English but in 1967 moved to Australia as part of Ten Pound Poms immigration. Jackman holds Australian nationality and belongs to white ethnicity.

He was raised as a devout Christian along with his four older siblings and a younger half-sister from his mother’s remarriage. Hugh’s parents separated when he was eight. After the divorce, Jackman lived with his father in Australi along with his two brothers while his mother moved to England with Jackman's two sisters.

Hugh Jackman finished his primary schooling at Pymble Public School and later attended all-boys Knox Grammer School. He graduated from the University of Technology, Sydney in 1991 with a degree in BA in Communication. He took several classes of acting during and after graduation.

During his high school, he was in a musical based on George Bernard Shaw’s Pygmalion, My Fair Lady in 1985. During the 90's he appeared in numerous television series- Correlli opposite to an Australian actress, Denise Roberts, Beauty and The Beast, Sunset Boulevard and so on.

X-Men, an American superhero film was the turning point of his career. He did several sequels of the movie portraying the character of Wolverine. Some of the popular cast of X-men known from their series names are- Patrick Stewart as Charles Xavier, Ian McKellen as Erik Lehnsher, Halle Berry as Strom, Famke Janssen as Dr. Jean Grey.

Jackman worked in Eddie the Eagle, a German-British -American biographical comedy-drama by Dexter Fletcher. Moreover, in 2016 he gave an uncredited cameo in the film X-Men: Apocalypse with $543.9 million box office collection with reinterpreted character in the third Wolverine film, Logan. In 2017 he was cast in The Greatest Showman by Michael Gracey.

On 11th April 1996, he married Deborra-Lee Furness, an Australian actress at St. John’s in Toorak, Victoria, Melbourne. Jackman and Deborra first met on the set of Correlli where they were co-actors. He personally designed the engagement ring for his wife.

The lovebirds tried a few times to have a baby, but they were unfortunate as Deborra had a miscarriage twice. So, after losing the hopes, they adopted two mixed-race children, Oscar and Ava. After several years of marriage, still, they share a strong bond and have shown no intentions of getting a divorce.

Jackman once suffered from most common skin cancer, Basal cell carcinoma. In November 2013 he removed basal cell carcinoma for the first time and again in 2014 he had to undergo surgery. Jack then went for promotions of X-Men: Days of Future Past with a bandage on his nose.

Besides acting, he was also involved in the charity works as he served for microcredit, an extension of small loans for a long time as a proponent. He donated $50,000 to Charity: Water and $50,000 for Operation of Hope. He is also a global advisor for the Global Poverty Project.

The popular actor, Hugh has an estimated net worth of $100 million. He has earned a huge amount of money from his movie series.

Jackman owns a triplex apartment in New York City worth $19 million. His another triplex worth $40 million located on 176 Perry Street I New York.

Jackman is a huge fan of Audi but loves driving his Q7,  large luxury SUV. He also owns a Volkswagen Jetta.

Jackman is also one of the global ambassadors for Montblanc, a German manufacturer of luxury writing instrument, watches and jewelry. He was also a brand ambassador for Micromax, an Indian mobile phone maker.

Ava Eliot Jackman is the second adopted child of Hugh Jackman and Deborra-Lee Furness who was born on 10th July 2005.