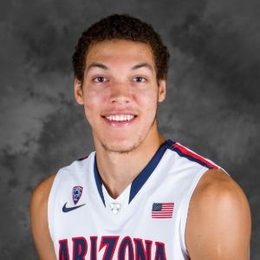 An American professional basketball player Aaron Gordon currently plays for the Orlando Magic of NBA. Before his professional career, he played college basketball for the University of Arizona. Gordon became the headlines of the media after losing the basketball dunk competition for the second time. Sources claim that he is robbed twice in the dunk contest. What's the truth? Let's find out in detail.

A famous personality always remains on the top search list of people. Their fans always try to find out all the details of their personal as well as professional life. In the same way, the well-wishers of Aaron Gordon also try their best to find out the information of him. 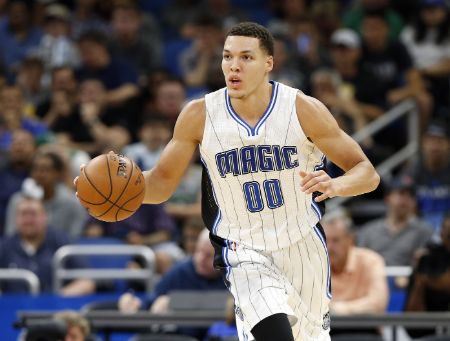 The handsome hunk Gordon has won the heart of girls with his outstanding playing skills and stunning looks. His fan-followings are keen to know whether the NBA star is already taken or yet to find a perfect life partner. Well, Gordon has not admitted to dating anyone in public.

He likewise is not spotted hanging out with girls on the public who could be his possible girlfriend. What's more, the basketball player hasn't shared any suspicious photos with girls on his social accounts, which could make him feel doubt regarding his affairs. 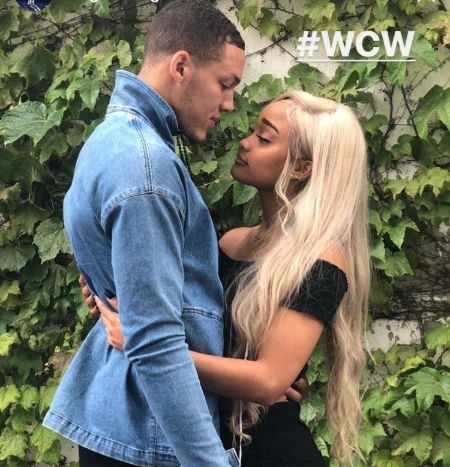 Moreover, there is no news or rumors surfaced on the internet about Gordon's hookup. As of now, he seems to be focusing more on his profession rather than being involved in a relationship. Or it could also be that the star is dating his lover secretly but keeping it away from the eyes of the media.

Besides, Gordon formerly dated basketball player Dakota Gonzalez who played for Kansas University. Probably their similar interest made the former lovers fall for another. 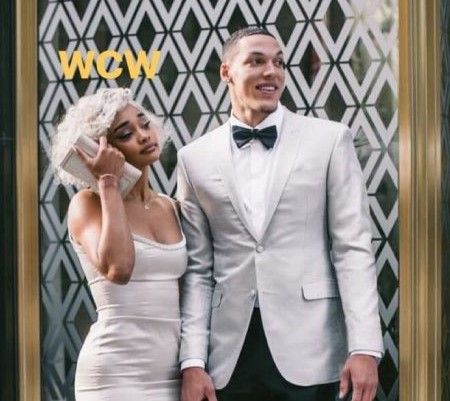 The two began dating in mid-2017. Unfortunately, the duo failed to carry on any more and broke up in September 2018. Some online tabloids reported that the former lovebirds separated because Gordon cheated on Dakota several times.

Failed To Win The Basketball Dunk Contest For The Second Time

The NBA player Aaron Gordon competed on the basketball dunk contest 2020. On the final, he faced Miami Heat’s Derrick Jones Jr. By defeating Dwight Howard and Pat Connaughton on the first round, the two high-flyers reached the final.

Gordon and Derrick went through ties in the first two rounds by scoring perfect fifties. On the final dunk, Orlando Magic star jumped over 7 foot 5 inch Boston Celtics rookie Tacko Fall, the tallest player of NBA. It was a perfect shot, and most people thought that Gordon would win the 2020 NBA All-Stars Slam dunk contest.

Nevertheless, things turned over. Gordon received only 47 points and lost the competition against Derrick with 1 point as he received 48 scores. After the contest, a judge revealed that it should have been a tie. As per the reporter Ramona Shelburne from ESPN, one of the judges said;

“We thought it was going to be tied. We were like, ‘This is a tie!' But somebody didn’t do it right. I don’t know who it is.”

It is the second time that the star failed to win the title. He lost his first contest against Zach LaVine in 2016 when they tied in the second round.

The final result created controversy. After the show, Gordon implied that he would not compete anymore as he felt to have robbed two Dunk Contest titles. He also expressed his dissatisfaction saying; 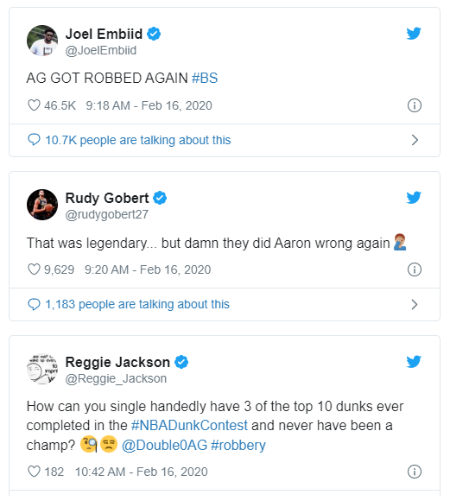 Several fans, as well as some NBA stars, also expressed their dissatisfaction via Twitter with the judgment. Some of them even claimed that Gordon is robbed twice in the dunk contest.

Moreover, his fans pointed Dwyane Wade, to be the one behind Gordon's loss. According to the fans, Wade formerly played with Jones in Miami. On the final dunk, he awarded Jones a 10 and gave Gordon only 9. But Wade denied the allegations and told;

"It took nine rounds. I mean, it wasn't biased. I wasn't the only one who gave him a nine, let's talk about that. There were three people that gave a nine. But people are going to talk."

Earns Well From His Prolific Career

Aaron Gordon played college basketball for one year at the University of Arizona. Later on, 26th June 2014, Orlando Magic selected him with the fourth overall pick in the 2014 NBA draft. Ever since then, he is playing the regular seasons with the team.

From his NBA career, Gordon makes a good income. From Magic, he receives an average salary of around $20,000,000 and holds a net worth of around $26 million.