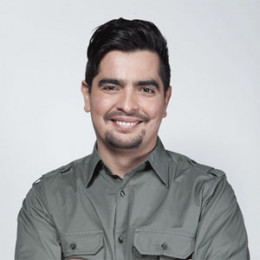 Aaron Sanchez is a chef and television personality, best known as the judge of Food Network's culinary competition show Chopped and is the co-owner of Centrico restaurant located in New York City. He serves as a Chef Ambassador for "Why Hunger," a moment to end poverty and hunger. By the age of 16, he started cooking in a professional kitchen. He is the son of Adolfo Sanchez and Zarela Martinez, a restaurateur and author.

Aaron Sanchez was born on February 12, 1976, in El Paso, Texas, the US to Zarela Martinez, a restaurateur and the author of several cookbooks, and Adolfo Sanchez.

He was raised along with his twin brother Rodrigo, an attorney in New York City. He is a renowned chef and television personality.

Aaron completed his graduation from The Dwight School. In 1996 he joined Johnson & Wales University in Providence, Rhode Island to study culinary arts. He started working at age sixteen with chef Paul Prudhomme.

In 1996, Sanchez opens up his own restaurants, Erizo Latino. He then became executive chef at L-Ray, which specialized in foods from the Caribbean and Gulf of Mexico.

In 2000, he was hired by the Eamon Furlong to open Paladar, a pan-Latin restaurant which was opened in 2001 and won Time Out New York's award for Best New Lower East Side Restaurant that year.

Aaron joined Masterchef US Season 8 as a judge along with Gordon Ramsay and Christina Tosi. He is very expert on cooking but his specialty is his traditional Mexican cuisine which he often used throughout the season

Sanchez is possibly single at the moment but previously he was married to Ife Mora in 2009 at an intimate ceremony. The duo first met during their work time as both of them refer to the same fraternity.

The duo shared a son named Yuma (born in 2010) and Ife has a daughter from her previous marriage, Sofia Piana. However, the couple couldn't handle their relationship and divorced in 2012.

My face melts when I am with Papi pequeno and he’s all rock and roll.

After divircig wife of 3 years, Sanchez is most probably single.

Aaron is now busy with his restaurants and career and prefers to keep his focus towards his goal rather than anything else.

The Masterchef US fame chef has earned a decent amount of net worth from his career as he succeeds to earned the net worth of $4 million, Despite that, he owns his own restaurants.

She is the first wife of Aaron, who also is a chef by profession. Her images can be viewed on the internet.

He is the first and the only son of Aaron, who was born healthy.

She is the step-daughter of Aaron. Her date of birth is unknown.