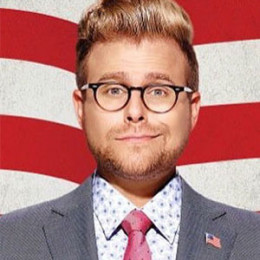 American comedian and writer Adam Conover is best known as the host and creator of the half-hour truTV show Adam Ruins Everything. Also, he played voice roles in the animated BoJack Horseman Netflix series.

Apart from his professional career, he is currently dating author and illustrator girlfriend.

Adam Conover's Personal Life: Is He Dating A Girlfriend?

Famous American comedian Adam Conover is currently in a relationship with his girlfriend named Lisa Hanawalt. Like many other famous stars, Conover also prefers to keep his personal life behind the bars.

Hanawalt is a famous illustrator, author, and humorist. She wrote and illustrated three funny imaginative books. Also, she is the creator of the animated show for Netflix called Tuca & Bertie starring  Ali Wong and Tiffany Haddish.

Few details about his dating life are known but it's pretty clear that the two started their romance in 2009.

He uploaded an image of his girlfriend via Instagram where he mentioned that they have been together for nine long years in April 2018. Yes! the couple is soon to celebrated 10 years of togetherness.

9 joyful years with my love of this life, @lisadraws. Re-upping for more ASAP, this is too good to pass up!!

In addition, both the lovebirds are active on social media and they frequently appear on each other's posts.

2009 babies vs. Now we’re your mom and dad and we’re very proud of you

Some sources reported that they were introduced by Raphael Bob-Waksberg.

Conover has a huge net worth which is still under review. He has an average salary of $500,000 per year.

Conover was born on 2 March 1983 in Smithtown, New York and was raised in Wading River. His mother Margaret Conover (née Howard) is a botanist and his father David O. Conover is a marine biologist.

He completed graduation from Shoreham-Wading River High School in 2000.

Later, he joined Bard College and received a bachelor's degree in philosophy.

He is the host and creator of the half-hour truTV show Adam Ruins Everything. In addition to it, he played a voice role in the animated BoJack Horseman Netflix series, including Paparazzi Birds and Bradley Hitler-Smith.