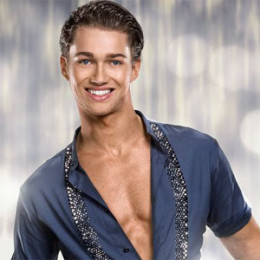 Alex Joseph Pritchard aka AJ is a British professional dancer and a choreographer currently known from the BBC One dancing series, Strictly Come Dancing. He has done two seasons of the show partnered along with Mollie King and Claudia Fragapane. Apart from that he also appeared on the reality show, Britain’s Got Talent with his childhood dancing partner, Chloe Hewitt.

Born as Alex Joseph Pritchard on 5th November 1994 in Stoke-on-Trent, England, he was raised by his parents Adrian Pritchard and Debi Pritchard along with his sibling Curtis Pritchard. He is an English and belongs to White ethnicity.

He was interested in dancing from the very early age. His parents being the founder of Pritchard’s Dance Academy, he also joined it to learn dancing.

Moreover, in 2013, he gave an audition for the reality dancing show, Britain’s Got Talent along with his partner, Hewitt. They were praised both by the judges and the audiences but did not win the show but reached up to the semi-finals.

After that in 2016, he appeared as a professional choreographer in the BBC dancing show, Strictly Come Dancing in the fourteen series where he partnered with Claudia Fragapane, an Olympic artistic gymnast. His amazing choreography was appreciated, but they did not win the game and captured the fourth place.

He again appeared in the fifteenth season in 2017, and this time he partnered with an English singer, Mollie King. They are still in the competition along with other contestants Alexandra Burke & Gorka Márquez, Aston Merrygold & Janette Manrara, Davood Ghadami & Nadiya Bychkova and others.

The couple, Pritchard and King, partners in Strictly Come  Dancing share a great chemistry together on screen and off screen as well. They came close after being together in the show. They both enjoy each other's company so were spotted in many places including award shows, events and other.

The pair together spent cozy nights, gave each other intimate celebratory hugs, and even posted numerous pictures together on their social media which created a rumor about King being her girlfriend. But both the parties have not addressed the rumors.

‘’ They're having a lot of fun. They are spending more time with each other than a married couple would do.’’

Pritchard is currently 20 years old and stands at the height of 5 feet 6 inches (1.71m). His actual figure of earning is not revealed, but his net worth is assumed to be in six figures.

Apart from that, he is also involved in charity works as he was in Specsavers Award in aid of Kidscape, an initiative against bullying, as a presenter.