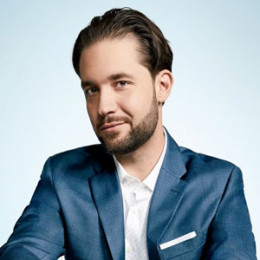 Alexis Kerry Ohanian, better known as Alexis Ohanian is an American internet entrepreneur and investor. He is the co-founder and executive chairman of the social news website Reddit. Also, he co-founded the early stage Venture Capital firm Initialized Capital which helps to launch the travel search website Hipmunk and started the social enterprise Breadpig. He is the fiancé of a famous tennis player, Serena Williams.

Alexis Ohanian was born on 24th April 1983, Brooklyn, New York to parents Chris Ohanian and Anke. His father is an Armenian-American whose grandparents came to the US as refugees after the Armenian Genocide whereas his mother is a German citizen.

He attended Howard High School in Ellicott City, Maryland and completed degree on commerce and history from the University of Virginia in 2005. His nationality is American and is of Armenian-German ethnicity.

After completion of his education, Alexis along with his friend, Steve Huffman pitched the idea, MyMobileMenu, to Y Combinator which passed on the idea and encouraged to come up with a new one which the company could potentially fund. Later, they founded reddit.com with the goal of becoming the front page of the computer.

When he was in Boston, his girlfriend had fallen five stories and was in a coma. Soon after the incident, his mother had been diagnosed with an inoperable tumor. He faced different family related problem during the period.

They joined the first batch of Summer 2005 and later hired by Conde Nast in 2006 for an undisclosed amount between 10-20 million dollars. He continued working for Reddit as a member of its Board of Director. In 2015, he returned to Reddit with co-founder Huffman to lead the now-independent company which he left in 2010.

During 2007, he launched Breadpig which is an incorporation that produces geeky merchandise and gives the proceeds to charity. Nowadays, he is no longer involved in the day-to-day operation of Breadpig.

TED also gave him an opportunity to speak about a whale named Mister Splashy Plants in 2009. The following year, he spent three months working in microfinance as a Kiva fellow in Yerevan, Armenia, where he helped to launch travel search website Hipmunk in 2010.

The same year, he announced to launch his own company Das Kapital Capital focusing on startup investing, advising and consulting. Not only this, he co-founded Initialized Capital and made seed investments in startups including Instacart, Zenefits, Opendoor, and Cruise.

Among all the investors in tech analyzed by CB Insights, Alexis was ranked number one investors for network and was named one of the Fast Company’s Most Creative People in Business. Also, The Daily Dot named him number one in the top ten most influential activist of 2012 and Forbes named him Mayor of the Internet.

He also teamed with Reddit General Manager Erik Martin and began the Internet 2012 Bus Tour from Denver, CO to Danville, KY to campaign for the open Internet during the Presidential and Vice Presidential debates.

In 2014, he launched the NYRD Radio podcast which guests on the show including Tim Ferriss, James Altucher, Carter Cleveland and Cameron Russell. Each week, the podcast focuses on a different story and features a guest around whom that story is centered.

Moreover, he worked with teenager Royouf Alhumedhi to campaign for a hijab emoji and teamed with Lester Chambers of The Chambers Brothers to launch a Kickstarter project to make a new album, Lester’s Time Has Come. The project later raised over $61,000 for the chamber. Also, he raised $12,244 for the non-profit Black Girls Code on Tilt.com that focuses on providing technology education for African-American girls.

Serena Williams is the fiancée of Alexis: as the couple engaged on 29th December 2016. The couple began their romantic love life affair on 24th October 2015 after meeting one another through a mutual friend.

Though the pair is not married yet, they welcomed a beautiful daughter on 1st September at St. Mary’s Medical Centre in West Palm Beach. They named their daughter, Alexis Olympia Ohanian Jr.

During 2011-2012, Alexis listed in the Forbes 30 Under 30 list as a prominent figure in the technology industry. In 2013, he and Erik Martin featured as champions of innovation in the 20th Anniversary issue of Wired.

Also, he was named in the Crain’s 40 Under 40 list for business in 2015. The following year, he was nominated as one of Fast Company’s Most Creative People in Business.

Alexis along with his fiancée, Serena has accumulated an estimated net worth of $170 million. They also have an adorable Ballen Isles mansion which has got swimming pool, Jacuzzi, Sauna and much more whose current value is more than $2 million. They have also got Continental car manufactured by Bentley that costs around $120,000.

Born on 1st September 2017, Alexis Olympia Ohanian Jr. is the first daughter of Alexis Ohanian. She is quite healthy as she weighted 6 Ibs., 13 oz.