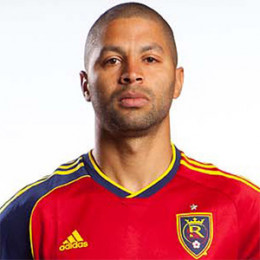 Alvaro Saborio is a brilliant football player belonging to Costa Rica who is in the current team of Costa Rica National Football Team and in the club side Real Salt Lake in Major League as a forward wearing jersey number 15. He had started his youth career at Monterrey Band debut in the professional football world from Saprissa in the year 2001. He is one of the experienced footballer in the Costa Rican National Football Team.

He is a married man. He has been married twice. His former marriage with his first wife, 2004 Miss Costa Rica got ended after two years of their marriage. The exact reason for their split is not known but there are rumors that the cause of the split is due to his extramarital relationships. The couple has no baby.

Later after divorce, he got married to his second wife, who is an athlete. Saborio and his wife are blessed with two adorable kids.

He is living a blissful married life with his wife as he frequently posts beautiful images of his family via Instagram.

Details about his net worth and salary is still under review. He signed a one year contract with Deportivo Saprissa on 10 January 2017. Soon after a month, he announced his retirement after having conflicts with Saprissa fans.

He represented his country in CONCACAF Gold Cups, Olympics and FIFA World Cup.

She is his first wife and a former Miss Costa Rica 2004. He does not have child from her.

She is his second wife. She is an athlete and is expecting his baby. They are living happily together.