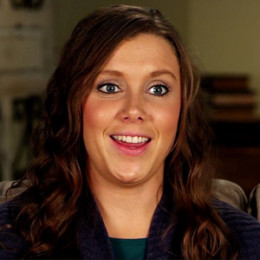 Anna Renee Keller aka Anna Duggar is an American reality star most known for reality shows like GrandDuggar First Birthday, 17 Kids and Counting and 19 Kids and Counting: First Grandson. Anna was married to Josh Duggar on September 26, 2008.

Anna was born on 23 June 1988 in Florida, U.S. As far as her ethnicity is concerned she belongs to White American and holds the American nationality. Her birth sign is Cancer.

Anna was raised in Florida along with her parents. She has three brothers and four sisters. She completed her high school at the age of 16 and then accompanied her father to work with him in local Juvenile Detention Center.

The renowned actress made her television debut in 2008  on a reality TV show named 17 Kids and Counting. Later she featured in 19 Kids and Counting: First Grandson which stars Josh Duggar and Amy Duggar King.

Additionally, Anna has featured in GrandDuggar first Birthday along with her husband, Josh Duggar, and father-in-law, Jim Bob Duggar.

Anna Duggar, 29, is a married woman. She tied the knot with Josh Duggar, the eldest son of a famous actor Jim Bob Duggar on September 26, 2008. Before their marriage, the couple dated each other for two years. The couple welcomed five children at that time.

Their first child, Mackynzie Renee was born in 2009. After two years, their second child was born who was named, Michael James Duggar. Recently in 2017, they were blessed with a baby boy named Mason Garrett.

Anna noticed Josh for the first time at the Discovery Health Channel documentary named 14 Children & Pregnant.  They met in 2006 through their families religious work at the ATI Conference.

In 2015 Danica Dillon, a pornographic actress filed suit against Anna’s husband, Josh claiming that he had assaulted her but given her money, which even caused a physical as well as emotional injuries during an episode of consensual sex.

According to Dillon, she explained that she provided $600 worth of lap dances to Duggar where she desired $500,000 in damages from Duggar. In 2016 after admitting that she lied about being with Duggar, she was forced to dismiss the lawsuit. Despite all the scandals, Anna is still together with her husband.

The 19 Kids and Counting star is living a lavish life along with her husband and five children. Her net worth is yet to be analyzed but her husband, Josh has accumulated an estimated net worth of $3.5 million.

Anna weighs approximately 155 lbs and is 5 feet 5 inch in height.

Anna Duggar was married to her longtime boyfriend Josh Duggar in 2008. Their wedding was aired on television in a show entitled "A Very Duggar Wedding".

Anna Duggar and Josh Duggar were blessed with a baby girl in 2009 after a year of their marriage. She is the first daughter of the couple.

Anna and her husband were blessed with their second child in 2011. The child was named Michael James Duggar and was the first son of the couple.

Marcus was their third child who was born in 2013 to the Duggar family.

Meredith, the second daughter of the couple was born in 2015. At the time of Christmas during 2015, she was just 5 months old. She was dressed in an animal printed onesie, accessorized with festive gold ribbon.

Recently, Josh and Anna were blessed with a baby boy in 2017 who was named, Mason Garrett Duggar. The child weighs approximately 9 lbs and is 22 inches tall.