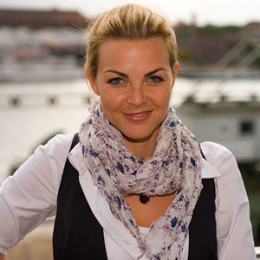 Annika Kipp is the wife of award winning actor Fredrick Lau. She is the television and radio news presenter currently working at Sat.1.

Annika Kipp was born on 12 March 1979. He hails from Munich, Bavaria, Germany.

Kipp is a news presenter on radio and television. She is serving at Sat.1 since 2006. Previously she used work at Antenne Bayern. Besides that, she has also made her appearance in the movies such as Oktoberfest, Fruhstucksfernsehen in 1992, Red! 2014: Der große Jahresrückblick der Stars(2014) and Die MyVideo-Show (2006).

Annika is a married woman. She tied the knot with Fredrick Lau on June 11, 2015. They dated for some time prior to their marriage. Fredrick is an award winning actor popular for his portrayal as Tim in the movie Die Welle.

The fans got quite shocked when they came to know about their 10 years age difference. Annika being older than her husband proved that love got no boundaries. Despite their age difference, the couple shares a strong bond. They were blessed with a daughter named Liselotte, born in 2014 and son Baz Barne Lau, born in 2016.

As a TV and radio presenter, as well as talented actress Kipp, possibly earns quite a lucrative amount from her career. Her net worth and salary have not been revealed yet but her husband’s  current estimated net worth is 2 million Euro.

Fedrick Lau is the handsome husband of Annika Kipp. The duo tied the knot on 11 June 2015.

Liselotta is the older child of Annika Kipp with her husband Fredrick Lau. She was born in 2014.

Baz Barne Lau is the second child of Annika Kipp with her husband Fredrick Lau. He was born in 2016.