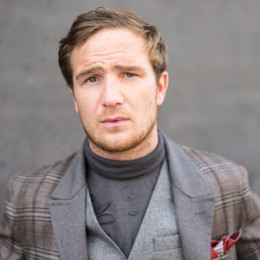 The two times German Film award winner, Fredrick Lau, is a German actor. He is better known for his role as Tim in the German socio-political thriller movie, Die Welle, based on the novel by Dennis Gansel. He then made a name from his successful hit movie Victoria for which he won German Film Award. He is married to his wife a German News presenter Annika.

He made his acting debut as a child actor in the movie, Die Polizistin in the year 2000. The same year, he was cast in the TV drama series, Acheterbahn.

At very early age, he appeared in dozens of movies and TV series. Though he played several roles in the movies and TV series, his role as Tim Stolefuss in the German movie, Die Welle (The Wave) directed by Dennis Gansel rose his popularity among the viewers and critics.He won German Film Awards for Best Performance by an actor in a Supporting Role in the year 2008. The movie also earned €23.6 million at the end of the year.

In 2015, he was cast in German drama movie, Victoria, directed by Sebastian Schipper which starred Laila Costa, Franz Rogowski in a lead role. This movie also received a positive review from the viewers and received his second German Film Award for his role Sonne.

Moreover, his next flick movie is The Captain, directed by Robert Schwentke. The movie stars Max Hubacher, Milan Peschel, Bernd Holscher, Waldemar Kobus, and Alexander Fehling which will be released in this year.

Fredrick married his girlfriend, Annika Kipp on 11th June 2015. It was a love at first sight for both of them. The married couple is blessed with two children: daughter Liselotta and son Baz Barne Lau, which complete their family.

Taking about Fredrick's net worth, he has an estimated net worth of 2 million euro.

Fredrick Lau is married to Annika Kipp, a German News presenter on radio and television. She used to work for Antenne Bayern and Sat 1. Apparently, she is 10 years older than Fredrick.

Born in 2014, Liselotta is the elder daughter of Fredrick Lau and Annika Kipp.

Born in May 2016, Baz Barne Lau is the second child of Fredrick Lau and Annika Kipp.