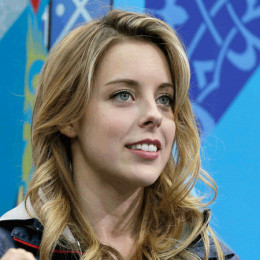 An American figure skater who is better known as three-time Grand Prix Final medalist. She is doing well with her career and is making a good net worth from her career as an ice skater.

Ashley Wagner is not married yet. She was in headlines after she interviewed in the media telling her long-term best friend Adam Rippon as her boyfriend but not an actual boyfriend. Maybe it means she feels comfortable around him or maybe she is hiding something fishy in her closet.

For now, it can assume she is single because both of them consider each other like a best friend only. The star moreover has not linked to anyone and even has not introduced anyone as her boyfriend, so is single as of now.

The skater, Wagner recently wrote an essay to USA Today about the incident which she faced in 2008. She opened up that Wagner was sexually assaulted by John Coughlin at the age of 17.

Ashley Wagner has the net worth of around $4 million. She makes the amount from her career as an ice skater. She moreover owns several medals from her career.

Ashley Wagner was born on 16th May 1991 in Heidelberg Germany. She is the only daughter of Lieutenant Colonel Eric Wagner, U.S. Army, and Melissa James, a former teacher.

Wagner moreover attended Saddleback College in California where she studied sports journalism. She was trained to be a figure skater in Kansas City and Tacoma. She was qualified for the U.S. Junior Figure Skating Championships in the 2002-2003 season. She is three-time U.S. national champion in 2012, 2013, and 2015 respectively. She also took part in U.S. team for the 2014 Winter Olympics and won a bronze medal in the team event.