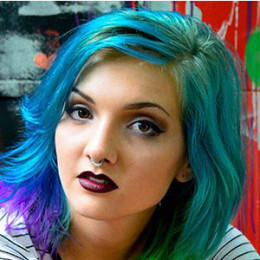 The renown internet personality Ayalla Karina is known for her cover songs which she posts on her YouTube channel. She was part of the band Stationery Hearts where she did the vocals. Karina is popular on Instagram boasting around 52.5k followers. She is mostly seen flaunting her short colored hair which is literally her trademark.

Ayalla Karina was born on September 9, 1997, under the birth sign Virgo in the United States. She attended Mountain View High School and later on enrolled at Potomac State College of West Virginia University to study business.

Karina grew up with her sibling, her younger sister. Her hometown is Chicago, Illinois. From an early age, she had been interested in singing and did lots of songs covers while growing up.

Ayalla Karina, 21, is a renowned social media personality and a YouTuber by profession. Before getting into this internet fame she was the vocalist of the band named Stationery Hearts. Currently, she is the lead singer of Kissing Sissies. 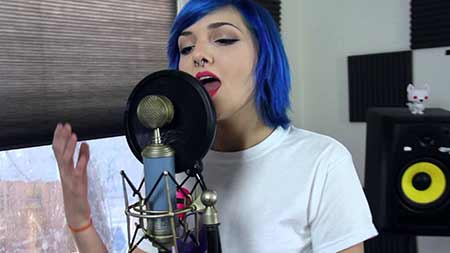 Karina is most popular on Instagram where she has around 51k followers and on the site, she shares photos showcasing her different looks. Besides, she is a YouTuber as well having 49k subscribers and on her channel, she posts videos of her song covers, makeup tutorials & other contents.

Karina also does collabs on her channel with another famous YouTuber named Hair Jordan and was featured on her 7 Seconds Challenge titled video. She has around 18.4k followers on Twitter.

Ayalla Karina's Net Worth and Earnings

Ayalla Karina is a social media personality whose net worth is not estimated as of yet. Her main source of earning is from her YouTube channel.

The earnings of videos which reaches 1 million views will make around $3k to $10k per million views. A YouTuber makes money mostly from sponsored ads shown in their videos.

Ayalla Karina is currently single and not rumored to be dating any boyfriend at the moment. The internet personality is living a good life with her family, friends and enjoying her life.

In 2016, she was reportedly dating YouTuber Richie Giese but broke up with him later on. Though the reason for their divorce is still not known.

They first met on November 2016 and were introduced by their mutual friend Billy. Her rumored ex-boyfriend is featured in one of her YouTube video titled "The Ex-Boyfriend Tag". He is on YouTube with the name Social Repose.

She enjoys watching How to Get Away With Murder series and her favorite movies are Big Fish and August Rush. As for her musical inspiration, she looks up to Alicia Keys and Eminem. Karina's favorite go-to food is oreo milkshake and sushi avocados.

Ayalla Karina is a charming lady with a well-maintained physique. She has a slim body figure and rocks her short colored hair which is mostly green, pink and blue.

Karina looks pretty with her light brown eyes and has a fair complexion. There is no information about her height, weight, and body measurements.

Here is a video of Ayalla Karina doing a Q & A session on her official YouTube channel.