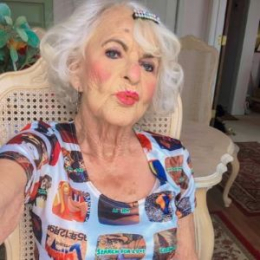 Baddiewinkle is a 90- year-old influencer who is known for wearing eccentric clothes and promoting legal marijuana on her social media platforms. She started her career from Instagram and her catchphrase 'Stealing Your Man Since 1928' became an overnight internet sensation.

Baddiewinkle is a 90- year-old influencer who is known for wearing eccentric clothes and promoting legal marijuana on her social media platforms. She started her career from Instagram and her catchphrase 'Stealing Your Man Since 1928' became an overnight internet sensation.

The 90-year-old Baddiewinkle is one of the most successful names in social media. She has nearly 4 million followers on Instagram which she earned through her eccentric style and badass attitude. 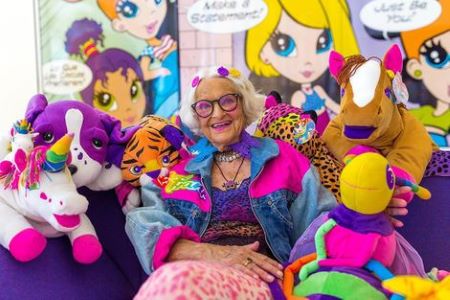 Baddiewinkle's Instagram journey started when her great-granddaughter Kennedy Lewis posted a picture of her in cut-off Jean shorts and a tie-dyed shirt. She gained instant popularity and she continued with more looks and style. In no time, she became a celebrity and was followed by other celebrities such as Miley Cyrus, Nicole Richie, and Gwen Stefani.

Baddiewinkle's popularity moreover is not only limited to the Internet, she now walks the red carpet for various brands and shows. She even walked the red carpet of 2015 MTV Video Music Awards.

Baddiewinkie's life, however, was not always filled with glitz and glamour. She grew up on a farm in Kentucky and worked in a factory named Dresser Industries for over 28 years to support her family.

The star furthermore bears many losses in her life. Her husband Earl George Van Winkle was killed in a car accident on their 35th wedding anniversary. Similarly, her son David Van Winkle died of bone cancer at age 46.

What is Baddiewinkle's Net-worth? her Income and Earnings

Baddiewinkle is currently one of the most popular social influencers with over 4 million followers. She earns $7,664- $12,774 per promotion post on her Instagram. Moreover, she also releases products in collaboration with brands.

Happy Pride y’all. Super excited to announce that I’ve teamed up with @incrediblecosmetics to give you and your gang the chance to #WIN my new INC.REDIBLE X BADDIE collection available exclusively @sephora. To enter: Follow @incrediblecosmetics Tag x3 PRIDESMAIDS in the comments below Good luck! #beyourbadddestself

Baddiewink is also an author and published a book named  Baddiewinkle's Guide to Life in 2017. The book costs $12.99 in Kindle and $ 15.22 in hardcover. She also owns a merchandise line named Baddie Winkle.

The line consists of clothes and accessories which ranges from $15 - $112. So, the star might definitely make a net worth of around $1 million.

Baddiewinkle was born on July 18, 1928, in Hazard, Kentucky, the United States as Helen Ruth Elam. She is an American Nationality and of White ethnicity. Her Birth sign is Cancer.

back in the day, still a babe

At present, Baddiewinkle has the characteristic white hair but her natural hair color is black. Her eyes are blue in color and stand at a height of 5 feet 2 inches.

They were together for 35 years before his death in a car accident on their wedding anniversary.