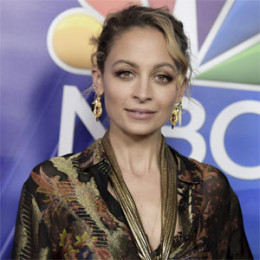 Teen Choice Award nominee, Nicole Richie is an American versatile lady as was included in several professions like acting, music, fashion, and writing as well. She gets much of appreciation from each of her works. Even after such amazing works, she was even arrested by police for several accusations. Besides of these, she is currently happily married and has two children.

Nicole Richi was born as Nicole Camille Escovedo on 21st September 1981 in Berkeley, California. Her sunshine is Virgo. She is an American by nationality and belongs to mixed ethnical background of English, Mexican, and African-American ancestry.

Her biological parents, Peter Michael Escovedo (brother of Shelia E) and Karen Moss gave her to Lionel Richie and Brenda Harvey who adopted her when she was nine. After her new parents adopted her, she was given their last name, and from then she became Nicole Richi.

Some years later, her father, Lionel Riche began to have some extramarital affairs which concluded with the divorce of her parents. Even after their separation, they were taking proper care of her.

Richie finished her schooling from Montclair College Preparatory School and later joined the University of Arizona in Arizona with Luke Walton and Kourtney Kardashian as her classmate. She studied media and arts but could not graduate as she dropped out after two years.

Richie began her career in 2003 featuring in a reality TV series, The Simple Life where she collaborated along with her friend, Paris Hilton. The series was praised by audience and earned more than 13 million viewers. Unfortunately, the series did not last more than the fifth season because of the fight between the two friends. All of the seasons went well except the fifth which failed to impress audience unexpectedly.

Moreover, after some movies and series, Richie made guest appearances in several films including Eve (by Meg DeLoatch), Six Feet Under (by Alan Ball), Project Runways (by Eli Holzman), 8 Simple Rules for Dating My Teenage Daughter (by Tracy Gamble) and few others.

Apart from acting, Richie is also involved in music. She made her music debut in 2004 after joining the rock band, Darling with band members Soleil, Sofia Alberti, and Josie Maran. In 2005 Richie performed live in ABC's show, The View.

It was rumored that she was going to release her album soon but later in an interview she denied the rumor. She even stated,

‘’ I do eventually [want to record an album], but right now I have a lot on my plate.’’

As of 2004, she gave an audition for a role in Broadway hit, Rent, a rock musical by Jonathan Larson, but was not selected. Later in 2013, she made a cameo in the music video song, Let There Be Love by Christina Aguilera.

Richie is married to her longtime boyfriend, Joel Madden. The pair got married on 11th December 2010 at Richie's father’s estate. The ceremony was grand and attended by numbers of guests including Benji Madden and Gwen Stefani. Richie was looking stunning on her wedding day. She was wearing a beautiful $2000 Marchesa gown that featured 100 yards of silk organza tulle.

Her husband, Madden is the lead vocalist of Good Charlotte, an American pop punk band. The couple is still together since 2006 and giving some serious relationship goals to the world.

The pair completed their family after they welcomed their two adorable children, Harlow Winter Kate Madden and Sparrow James Midnight Madden. Her children’s stardom also raised to peak after some of the pictures of her child, Harlow was sold to the People magazine for $1 million.

Keeping side the current relationship with her, she was dating DJ AM or Adam Goldstein in her past. The couple shared an on-off relationship between them and despite that, the couple engaged in February 2005 but got separated only after the ten months of their engagement.

Besides the relationship, Richie from the teenage began to experiment the drugs and alcohol. Some months after the consumption of drugs she was caught by police with heroin in her car. After she pleaded guilty for several times, she was ordered to join the drug rehab which she did join.

As of 2006, she was arrested by police after she drove her car in the freeway of Burbank, California. After several investigations, it was found that she had smoked marijuana and took some painkillers.

Richie was arrested multiple time like for brawling in a nightclub, driving with a revoked license, failing a field sobriety test, and many others.

Moreover, in 2006 she struggled with drastic health issue when she grew thinner than before. She was anxious about her health, so she hired a doctor and nutritionist. A year later, she was taken to the hospital for dehydration and was diagnosed with hypoglycemia, a low blood sugar.

The 36 years gorgeous lady stands at the height of 5 feet 2 inches (1.57m). She is one of the fortunate actors who has an estimated net worth of more than $5 million.

Apart from her movies, Richie is also earning some from her music career, writing career as she wrote some of the books like a semi-autobiographical novel, The Truth About Diamonds which was listed at number 32 on The New York Times Best-Seller List in the year 2006.

Apart from all these, she generates much of income from her fashion career. She became the face of Bongo Jeans, and Jimmy Choo ads. Besides, she also opened her own jewelry line, House of Harlow 1960 which was praised by popular personalities including Ashlee Simpsons and Madonna.

In the following year, she even opened her own clothing line, Winter Kate which became one of the popular high-end fashion lines of the year. With such flawless works, she is successfully earning a great amount of money which she utilizes to maintain her lavish life.

On 11th December 2010, Nicole Richie got married along with the lead vocalist for Good Charlotte, an American pop punk band, Joel Madden after dating for several years.

Before getting married, the pair, Nicole Richie and Joel Madden welcomed their first child on 11th January 2008. Her photos were sold by her mother to People magazine for $1 million.

A year after the birth of the first child, the couple, Nicole Richie and Joel Madden welcomed their second son on 9th September 2009. He is currently 8 years old and is too adorable.