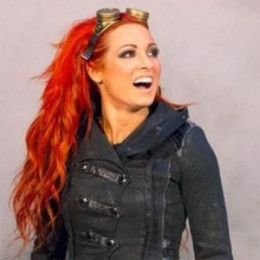 Rebecca Quin, popularly known as Becky Lynch is an Irish wrestler. She is currently signed to WWE performing on the SmackDown brand. She made her debut appearance at an NWA Ireland show in Dublin. She came to limelight after she signed to WWE in 2013.

Becky was born as Rebecca Quin on 30th January 1987 in Dublin, the Republic of Ireland. She is an Irish by nationality and is of White ethnicity. She was raised by her parents along with her brother. She used to watch the wrestling match with her brother. Her brother is also a wrestler who played with the ring name, Gonzo de Mondo.

Talking about her academics, Lynch graduated with the degree in acting from the Dublin Institute of Technology and also, she also joined Columbia College Chicago and the Gaiety School of Acting. With that degree, she also acted in numerous plays from 2011-12. After that, she also joined the University to study philosophy, history, and politics but was not graduated so again joined and studied health and exercise.

Before joining wrestling, Lynch did her first job as a car washer along with her nine mates when she was only eight years old. She along with her mates used to charge $1.32 per car. At that time she did just for the sweets rather than other. She moved to her job as a waitress in a bar.

Lynch then joined as a sandwich maker and a pizza chef. She then again left the job and became a flight attender which was one of her first serious job of the life. She used to have a strict routine and learned about navigating which she compared with her wrestling.

At the initial phase of her career, she wrestled in the Ireland but lost against Eden Black, an English wrestler at an NWA Ireland show. In 2005, she appeared at a Fighting Spirit Federation show, where she participated for the World Queens of Chaos Championship. After a year, she competed for One Pro Wrestling and participated in the International Zone promotion by defeating Emil Sitoci and Robbie Mireno.

In the year 2005, she went to Japan to compete for International Women’s Grand Prix teaming with Gran Hamada and Aja Kong. This tour became the highlight of her career. During the same year, she was again defeated by an English wrestler, Skye at Queens of Chaos’ show. In the same year, she joined the Canadian promotion SuperGirls Wrestling which is an all-female offshoot of ECCW (Extreme Canadian Championship Wrestling).

She also appeared at a New England Championship Wrestling where she competed in a four-way match and won the match. In 2006, she worked for the all-female promotion Shimmer Women Athletes where she made her debut for the promotion at the DVD taping of Volume 3.
WWE

On 8th October 2013, she signed a two-year contract with WWE. She was given a ring name, Becky Lynch after being signed and debuted at an NXT live event after a month. In 2014, she debuted on an episode of NXT and defeated Summer Rae after that was teamed up with Bayley.

Later on, in 2015 he participated in a fatal four-way match for the NXT Women’s Championship. Moreover, in the same year, he debuted in the episode of Raw in the WWE Divas division. Later on, she was drafted to the Smackdown as a part of the 2016 WWE draft and made the first appearance defeating Natalya, Noami, Alexa Bliss, Carmella, and others.

After that in September, she won a six pack elimination challenge to become the inaugural SmackDown Women’s Champion which is the first victory of her in the WWE. As of 2017, in the Money in the Bank, she participated in the first-ever women’s Money in the Bank ladder match which she lost.

During the match, she made many signature moves including Arm drag, multiple kick variations, cross arm breaker, multiple suplex variations and others.

Lynch is currently in a relationship with her boyfriend, Luke Sanders. He is an American mixed martial artist who is recently competing in Bantamweight division of the Ultimate Fighting Championships. The couple met for the first time in February 2016 which they announced via Instagram by posting a picture together.

From summer 2016, they started dating which was cleared after they were spotted together at a Pro Wrestling Guerrilla show. The pair is sharing a strong bonding and is happy together. They are not just making their relationship stronger but also making their career string as well. Till today they are together but yet not married and no such buzz about their break up as well.

Besides these, she has suffered from two stingers, and her ankles were also broken during the wrestling. After that, she also appeared in acting, while she took a break from wrestling.

Lynch is today at the age of 30 and stands at the height of 5 feet 6 inches. She earned much from her works and career which she utilized to maintain her high profile life. As of currently, she has an estimated net worth of $1.25 million.

Moreover, she also earned much from other sources like as she appeared in Xavier Woods’YouTube channel named, UpUpDownDown as Soulless Senpai and also appeared in two WWE video games from which she might be earning much of the amount. In addition, she might also collect some of the amounts from the acting which she did while taking a break from the game.

With such amazing collection, she owned many luxury cars and also owned her own house which looks really big and expensive. The 30 years, the wrestler is currently dating since a year.