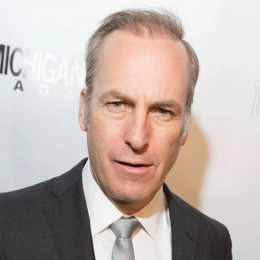 An American actor, writer, director, comedian and producer. He is better known for his role as lawyer Saul Goodman on the crime drama series Breaking Bad which is broad casted from AMC TV channel. When he was just a young his parents divorced. He attended Naperville North High School. He graduated from Southern Illinois University in Carbondale. He has a younger brother who is comedy writer named Bill Odenkirk. In 1987 at starting of his career he was hired as writer at Saturday Night Live. He is director of radio comedy show called "The Prime Time Special". He gained more fame after he co-directed and starred HBO sketch comedy series named "Mr. Show with Bob and David".

Exploring his personal life he is already tied in knot with love of his life. Though he was having an relationship with his ex-girlfriend before he was married but currently there is no rumor or report regarding his extra marital affair with anyone which proves that he is very faithful towards his wife. Together the couple is blessed with two children. Similarly, his Better Call Saul co-star Michael McKean is married and shares two kids with his wife.

Professionally she is the executive producer of With Bob and David. She is mother of two children.

She is very cute and gorgeous daughter of the family.