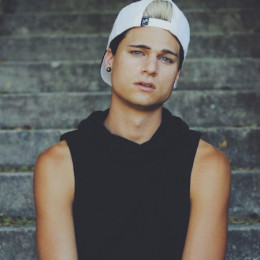 Bradlee Wannemacher is a popular American YouTuber, running his self-titled YouTube channel. He also participated in several reality shows like- 14th season of American Idol and The X Factor. Wannemacher is a bisexual.

Bradlee Wannemacher was born Bradley David Wannemacher on 6th February 1991 in Lima, Ohio under the birth sign Aquarius. Wannamacher is American as per nationality, and as far as his ethnicity is concerned, he is White. His parents raised him along with his sister.

The same year, Wannemacher auditioned in the reality series, The X Factor (judges- Simon Cowell, Sharon Osbourne, Louis Walsh and Dannii Minogue among others) from where he rose to fame. Later, he competed in the 14th season of American Idol (judges- Harry Connick Jr., Jennifer Lopez, and Keith Urban)  and ranked in the top 38th best audition in Boot Camp week.

From the shows, he got recognition and now has more than 800k subscribers on his YouTube channel. Till date, he has collaborated with many other YouTubers including Johnnie Guilbert, Lush BryanStars, Nick laws and Acacia Brinley among others.

Bradlee Wannemacher publicly announced that he is bisexual. Wannemacher has been in multiple relationships with both male and female.

Wannemacher on 6th December 2017 posted a picture with Zac Efron with the caption,

‘’I met my husband in London #greatestshowman.’’

He has posted various kissing videos with his boyfriends on YouTube- the video he posted on 8th August 2017 was titled, ''We’re in love … (no hate plz!!!)'' and another posted on 23rd February 2017 titled, ''Kissing My Ex-Boyfriend'' among others.

He was once in a relationship with fellow YouTuber Mason Healey. The former pair first met during a central casting in 2015. They initially started off as friends and later dated for nearly a year. Wannemacher is possibly single at present.

Bradlee Wannemacher has an estimated net worth of thousand dollars, but the exact amount is not confirmed yet.

Wannemacher earns $1.4k to $23.1k yearly from his YouTube channel which has over 800k subscribers.