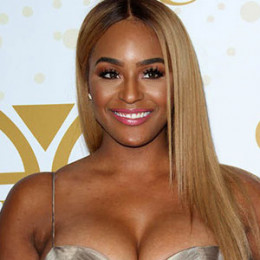 Brandi Maxiell is a married woman. She is tied the knot to NBA player Jason Maxiell on August 1, 2010, in Denton County, Texas, United States. They, however, first met when they were in high school.

Brandi Maxiell with her husband and son

After undergoing surgery and treatments, she became cancer-free in 2008. Brandi organized charity events for ovarian cancer awareness and all the money from this event will be donated to the National Ovarian Cancer Coalition of Dallas.

On September 8, 2018, when the duo attended the interview with Iyanla Vanzant, Jason admitted that he was in the relationship with 341 girls, while the surprising part of an interview that 50 out of 341 were during their marriage. After he admitted, Brandi walked off from an interview.

Brandi Maxiell Learns the Surprising Extent of Her Husband's Cheating, Check out the full interview!

Brandi Maxiell holds an estimated net worth is around $2.5 million. She is earning a good salary from brand endorsements deals and business.

Maxiell is the co-founder of 'Brandi Maxiell Cosmetics'. Her company manufactures lipsticks and eyelashes which costs $18. Moreover, she also runs a salon called 'The Midway Salon & Suites'.

On the other hand, her husband Jason Maxiell has an estimated net worth about $8 million.

Brandi Maxiell was born as Brandi M Duncan on May 21, 1983, in Dallas, Texas, United States. Her father had a barbershop and aesthetics business. Her birth sign is Gemini. Furthermore, she holds an American nationality and belongs to African-American ethnicity.

During her childhood days, her parents separated. After that, she and her sister, Jayde Penn started living with her mother. Her grandmother played a vital role in her upbringing. She taught Maxiell about makeup lessons which later helped on to establish the cosmetics business. Apart from that, she also went to church almost every day with her granny.

In the year 2007, she completed her education from the University of North Texas with a major in business. Also, she starred on the school’s track team.

In addition to that, she works as an entrepreneur and inspirational speaker. Brandi even featured at Access Hollywood Live and the Arsenio Hall's show. Similarly, she appeared on the TV series documentary called E! True Hollywood stories.

The TV star is a good friend with Basketball Wives LA star Malaysia Pargo. Once in an interview, she said, she sounds like Beyoncé when she sings in the shower.

Jason Maxiell is a former American professional basketball player best known for his tenure with the Detroit Pistons.