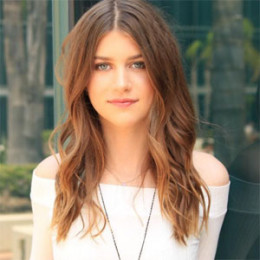 American actress, Brooke Butler is known for starring in the comedic horror film, All Cheerleaders Die in 2013. She was also cast in the 2015 horror film The Remains. At the age of 5, she began acting & singing after Butler fell in love with Phantom of the Opera.

Brooke Butler was born on 27th January 1989, in Woodinville, Washington. She belongs to White-American ethnicity/race and holds an American nationality.

Butler is the son born to Greg Butler and Sunny Butler. She was raised along with her younger brother, Bret Butler. At the age of five, she fell in love with Phantom of the Opera and began acting and singing.

Butler went to the University of Southern California, where she was a USC Cheerleader. Later, she earned a Bachelor's degree in Dramatic Arts.

At an early age of five, Brooke Butler started singing and acting, as she fell in love with Phantom of the Opera. At the age of eight, Butler made her acting debut through the stage production of Les Miserables.

Butler made a guest appearance on the Comedy Central series Tosh.0. In 2013, she featured in American comedic horror film, All Cheerleaders Die, starring, Caitlin Stasey, Sianoa Smit-McPhee and so on.

In the year 2015, Butler starred in the horror movie, The Remains alongside Samuel Larsen and Todd Lowe. In the same year, she cast in the movie, The Sand and While You Were in a Coma.

Brooke Butler is unmarried and has no children. She is currently dating Chord Overstreet, an American actor, singer, musician, and composer. The pair began dating since 2015.

They have a healthy relationship. However, they haven't mentioned about their plans. Besides, there are no records of her contacts.

Brooke Butler earns a considerable amount of money from his acting as well as a singing career. She has worked in the several movies like All Cheerleaders Die, The Remains, and many others.

According to some online sources, Butler has the net worth of $4 million. She is still active in the field of acting, and her net worth is increasing in upcoming days.