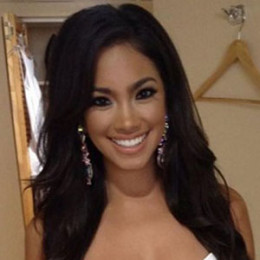 Bryiana is a gorgeous American model and a very charming young lady with a beautiful smile. She is most popularly known as the wife of The MTV “Ridiculousness” host Rob Dyrdek. Though she was living her own life she was all over the media when she tied the knot with famous personality Rob Dyrdek. She believes herself that for all success she has obtained her husband is the one to be praised.

She belongs to Filipino, Chinese, Cherokee, Caucasian, and Spanish descent.

The supermodel and beauty pageant winner is renowned for being the President of the Iconic Beauty initiative.

She became the winner of the Miss Teen of the Nation in 2008 and Miss California in 2010.

In September 2013, she gained wide popularity as the Playboy Playmate of the month.

At present, she's working as a clothing designer and heads Iconic Beauty by Bryiana Dyrdek.

Flores' net worth is estimated to be around $3 million as of January 2019.

Flores is living a blissful married life with her husband Rob Dyrdek.

Bryiana Noelle Flores got engaged to the Fantasy Factory host Rob Dyrdek after two years of their togetherness on 15 April 2015. The most beautiful couple got engaged in a famous function organized with all his fans and family.

Both of them were happily engaged and they were married in an outdoor ceremony surrounded by their closest friends and family. They shared this pleasure moment through Instagram to their fans.

The lovely couple tied the knot on 21 September 2015 in a grand ceremony in California.

They welcomed their first child a baby boy Kodah Dash Dyrdek in September 2016. The pair announced that they were expecting second child on 24 June 2017. They took Instagram to share the blessed news.

The best Christmas gift is the presence of family wrapped in love Merry Christmas from our family to yours!

Apart from her happy family life, Flores has 681k followers on Instagram as of January 2019.

The ‘MTV’ personality got engaged to his girlfriend Bryiana Noelle Flores in Disneyland. The ridiculousness host Rob Dyrdek tied the knot this model and clothing designer on September 20, in an outdoor ceremony surrounded by their closest friends and family.