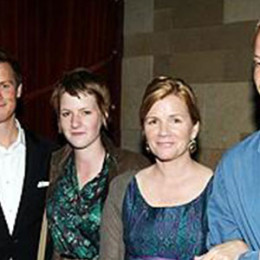 Calla Louise Mapel is the front-woman of the band Gallop. She played her first live show at Genghis Cohen in Los Angeles. She performed with her mother Singer/Actress, Mare Winningham. Her first and most important musical influence. Calla Louise Mapel began writing and performing her own music. While in New York she played regularly at the Tea Factory in Brooklyn, and occasionally at house shows and boat shows in the Gowanus Canal. In 2007, she joined her mother on stage again for the Eureka Springs Bluegrass festival.

Calla Louise Mapel was born in 1987 to parents Mare Winningham and William Mapel. There is not much information on her childhood, hometown, and educational background. She has four siblings, named Patrick Mapel, Jack Mapel, Happy Atticus Mapel and Riley Mapel.

Calla Louise Mapel and friends Jesse Waldman (accordionist, pianist), Lauren Vidal (cellist), and Angie Kuzma (violinist) formed a band called Gallop in which Calla sings and plays the guitar. Since its formation, Gallop has performed at various venues around Portland and California, including Valentine's, The Waypost, the Sebastiani Theater, and Goorin Brothers Hat Shop.

Calla Louise Mapel has not disclosed her personal life on social sites. There is no information available on her relationship status. It is not known whether she is married or is in a relationship and has a boyfriend or is single.

Calla has remained discreet and avoids the public attention in her private life. She loves her privacy and keeps her personal life out of professional. There are no rumors about her related to other men.

On 14th August 2005, her brother Riley Mapel passed away at the age of 23 in Los Angeles, California after he reportedly committed suicide. Riley was studying acting at LACC's Acting Academy at the time. He was buried at Forest Lawn Memorial Park (Hollywood Hills).

The details of the death were not published as it was not in the best interests of the family. Her parents opted to grieve in privacy.

Calla Louise Mapell's net worth is not revealed to public knowledge. Meanwhile, her mother Mare's net worth is estimated to be $1.5 million. Her source of income includes her salary and earnings from her career as an actress and singer-songwriter.