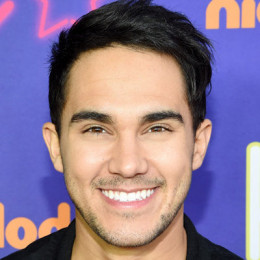 Carlos Roberto PenaVega is an American actor and singer best known for starring as Carlos García on the Nickelodeon series Big Time Rush. He is the host of the Nickelodeon game show Webheads.

Prior to heading towards a wedding, they engaged in August 2013. The BTR star and his sweetheart turned their relationship into holy matrimony after dating several years. The duo is devout Christians.

The family of four lives a blissful life in Columbia, United States. They relish sound life without any rumors of divorce and extramarital affairs.

How Much Is Carlos PenaVega's Net Worth?

Carlos PenaVega's estimated net worth is $6 million. The Columbia, Missouri native earns big bucks from his career as a singer and actor.

Penavega and his team were paid $200 thousand each. Big Time Rush possesses a net income of $10 million in 2013. At that time, they sold over 2 million music albums worldwide.

Carlos PenaVega made his first screen debut as a guest star at age ten on ER. He starred on the  Nickelodeon series Big Time Rush as Carlos García along with Kendall Schmidt, James Maslow, Carlos Pena Jr, and Logan Henderson.

Carlos PenaVega was born on August 15, 1989, in Columbia, Missouri, the U.S. He attended Sagemont Upper School where he was a cheerleader.

His mother of Dominican descent and father is of Spanish and Venezuelan decent. He studied musical theater at the Boston Conservatory and had his first feature film role in the 2011 drama Little Birds as Louis.

She is an American actress and singer best known for her role as Carmen Cortez in the Spy Kids film series and Shilo Wallace in the film Repo! The Genetic Opera.