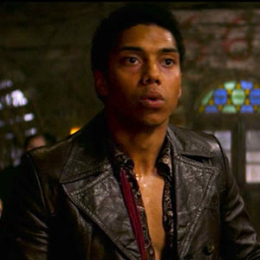 British actor, Chance Perdomo is one of the famous television actors who is praised and loved in Hollywood regarding their acting skills and stunning looks. He is also popular for starring in the Netflix series named Chilling Adventures of Sabrina. The 22-years-old actor was nominated for the British Academy Television Award for Best Actor for working in the television series like Killed by My Debt, Midsomer Murders and many more.

Personal Life of Chance Perdomo; Is he Dating Someone?

Chance Perdomo is possibly single as of now. The well-known actor is currently out of any dating relationships and seems focused on his career. Moreover, he is never spotted with any girl in any events and award show together out of the reel life.

Famous British Netflix actor Chance Perdomo during one of his photoshoots.

Chance is currently out of any rumors and controversies regarding his personal life. Despite being out of the relationships, he once posted a picture with a girl named Tatiana Gabrielle Hobson with some love quotes. Here take a look at the Instagram post he shared;

There’s nothing I can say to @tatigabrielle that she doesn’t already know. She’s knows be better than anyone else & I love her dearly. I’m grateful for the ways in which you push me to be greater. Always. She’s ferocious & kicks ass on a daily whilst being as equally kindhearted & compassionate. I’m always here for you #cherryblossomhibiscus #jadensmithlookinass

Chance is an active person on social media where he uses platforms including Instagram. Additionally, he loves to go on vacation to new places and often shares pictures on his social media accounts.

What is the Net Worth of Chance Perdomo?

The 22-years-old actor started his acting career in the film industry by starring in 2016 short film named Longfield Drive with a role name of Rodell. After that, he got a chance to appear in the 2017 short film entitled The Importance of Skin as Ryan.

the Longfield actor debuted in the television screen by appearing in the 2017 book-based television series named Hetty Feather in the episode named The Past Returns. Since then, he starred in many television series including Shakespeare & Hathway: Private Investigators, Killed by My Debt, and Midsomer Murders. Besides, he is currently busy working in the Netflix series Chilling Adventures of Sabrina along with stars like Adeline Rudolph, Kiernan Shipka, Ross Lynch, Jaz Sinclair, and many more.

Take a look at the interview of the Netflix actor Chance Perdomo talking about his Netflix series 'Chilling Adventures of Sabrina' Part 2!