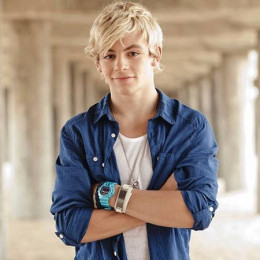 Ross Shor Lynch is an actor, musician, singer and songwriter. He is well known to public as Austin Moon of Austin & Ally and as Brady in Disney's Teen Beach Movie. He along with his partners founded the pop rock band R5. He was home schooled and at that time he learned how to play Ukulele, piano, bass, drums. He was born to Mark and Stormie, who first met at Elton John Concert.

Talking about his personal life, he hasn't been married to anyone yet and does not have any children. As he is so young and handsome, lots of girls are crazy about him.

He has dated two beautiful girls in his past days but he couldn't hold with them for a long time and broke up.

Rumors about his relationship with the co-star of The Chilling Adventures of Sabrina, Jaz Sinclair caught the media attention when they frequently appeared in each others' Instagram posts.

Lynch finally opened up that the two are simply close friends. He said,

"Me and Jaz and a few other of the actors really just hit it off, and we would spend everyday together. So, Jaz is like, my closest friend right now. I’m the favorite’s favorite, that’s what we always say… because she’s everyone else’s favorite, but if I’m her favorite, then it’s like, ‘OK cool. I can deal with that.’"

Have a look at one of Lynch's post with Sinclair:

Happy Birthday to my favorite. I'm really happy you were born Here's to many more good chats, belly laughs and dances in the new year

He amassed an estimated net worth of about $5 million as of 2019.

Ross Shor Lynch was born on 29 December 1995 in Littleton, Colorado.

Previously, he was the lead vocalist of the pop rock band R5. He made acting debut as Austin Moon on the Disney Channel's series Austin & Ally.

He portrayed the role of Harvey Kindle, Sabrina Spellman's boyfriend on the Netflix TV series Chilling Adventures of Sabrina.