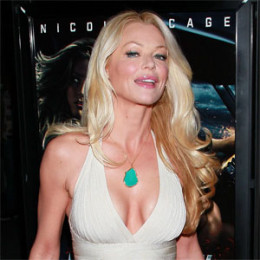 The two times Emmy Award-nominated American actress, Charlotte Ross came to fame after appearing on the NBC Daytime soap opera, Days of Our Lives. From the very least work, she earned much of the popularity and got a chance to work in numerous TV series and movies.

Charlotte Ross was born on 21st January 1968 in Winnetka, Illinois with the birth sign Aquarius. She is the daughter of Debbie Ross Kulby and Peter Ross (a financial advisor). She is an American and belongs to White ethnicity. Ross grew up along with her younger brother, George (a hedge fund analyst).

Ross attended the New Trier High School. With a dream to be an actor, she participated in several plays and hometown theater productions. She made her first on-screen performance from My First Mouthpiece.

After finishing school, she moved to Los Angeles to pursue her career in acting. Ross debuted from the movie named, Touch and Go by Robert Mandel in a small role. Moving on, she auditioned for the TV series, Married… with Children but she became the producer's second choice after Christina Applegate. In the end, she was not selected.

She appeared in Days of Our Lives alongside Deidre Hall, Kristian Alfonso, Arianne Zucker, Alison Sweeney, Eric Martsolf, Galen Gering and others. She earned much of the fame from the series and also was nominated twice for the Daytime Emmy Award for Outstanding Younger Actress in a Drama Series. With the very fewer works, she gained much of the popularity and was successful to grab much of the attention as well.

In 1992 she was called back to make a guest appearance on Married … with Children. She then appeared in many of the movies as well as series like Foreign Student, Love and a .45, Live!, Reasonable Doubts, The 5 Mrs. Buchanans, and others.

She is also credited for her work in musical drama series, The Height where she sang one of the hit songs, How Do You Talk to an Angel.

From 2001-2004 she appeared in the ABC drama series, NYPD Blue. In an episode called Nude Awakening in NYPD Blue, featured a shot of Ross's buttock due to which FCC fined each of the 52 ABC stations $27,500 for indecent content between 6am-10pm. However, the charges was revoked on January 4, 2011, by the U.S. Second Circuit Court of Appeals stating that the FCC's enforcement of its indecency rules was "unconstitutionally vague and chilling

Apart from acting, she joined the series of Tae-Bo infomercials and co-host along with Billy Blanks.

On 18th October 2003, Ross married her husband, Michael Goldman after dating for some months. It was a grand ceremony, and the guest list included some celebrities as well.

Some months after their marriage, the couple welcomed their first child and named him Maxwell Ross Goldman. His name was the combination of Ross’s and her mother’s maiden name. Everything was going smoothly until, 2008 when they separated from each other for some unknown reasons. But till today even after the separation, they are good friends and will remain so for the sake of their child.

She then dated Patrick Eugene Aurignae. But the relationship was so abusive as he even threatened to drown her dog and even broke her nails as well. Also, she was even assaulted in a restaurant in front of the mass, and due to such reasons, the relationship ended. As of now, Ross is enjoying her single life.

The gorgeous actress, Ross earned much from her career and other sources as well. She appeared naked in advertisement captioned 'I’d Rather Show My Buns Than Wear Fur' from which she might also earn much. As of now, Ross has an estimated net worth of $10 million which.

On 18th October 2003, Charlotte Ross got married to Michael Goldman after some months of dating. The ceremony was grand and was attended by many guests including celebrities. But unfortunately, the couple divorced due to some unknown reasons in 2008 after having a baby together.

Charlotte Ross gave birth to her first child named, Maxwell Ross Goldman with her husband, Micahel Goldman. Even after the divorce, they have remained friends for their child.