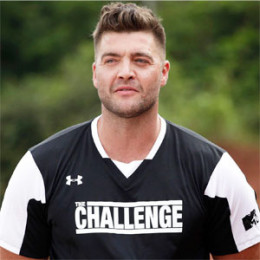 Christopher Tamburello is a popular TV personality, recognized as CT. He is best known for his appearance in the MTV series, "The Challenge." He has also worked on other reality shows like "The Real World Paris."

Born on July 16, 1980, Chris 'C.T.,' Tamburello is the son of Ramona Tamburello and Vincent Tamburello, Sr.

He was raised along with his three other siblings; Vanessa Tamburello, Vinny Tamburello, and Jason Tamburello in Brooklyn, New York, USA.

His birth name is Christopher Michael Tamburello. He is an American by nationality and belongs to the Greek, Italian and Irish descent. CT graduated from the University of Massachusetts at Amherst with a degree in business Administration. He used to work as a bartender during his college days.

Tamburello began his career in 2003 with the show, The Real World: Paris as a cast member. The show helped him to gain public attention mostly because of his high temper. He used to fight with his fellow members Christina, Leah, and Adam in the show.

Later, he signed the MTV show, The Challenge, which raised his popularity to a new height. He is active on the show since 2004 and has won many challenges. He has appeared on 154 episodes till date and is one of the longest-serving competitors on the show.

The Challenge fame star, C.T. is romantically involved with his longtime girlfriend, Lilianet Solares, an American model. The duo first met in 2015 in Florida through a mutual friend and eventually fell in love.

The pair is blessed with a son, Chris Junior and he revealed this news at the 2017 premiere of his show, The Challenge. Tamburello often shares his son's pictures and videos on social sites.

He married his longtime love on 8 September 2018 in front of their friends and family. Though the couple who prefers hiding their personal life avoided posting photos on social media, they filmed the ceremony and pre-festivities for an upcoming special on MTV.

Before dating Lilianet Solares,  The Challenge star dated Diem Brown but unfortunately, she passed away in 2014 due to ovarian cancer. As per sources, CT proposed to her on the deathbed with a ruby ring just four days before her death.

Christopher Tamburello has an estimated net worth of $400,000  at present, however, no official confirmation has come about it.

Besides that, he invests in real estate business also which adds more to his income.

Apart from that, he weighs an average height and maintains a good physique.

Chris Junior is the only son of Chris 'C.T.' Tamburello. CT revealed the news of having a son during the premiere of his show, The Challenge.