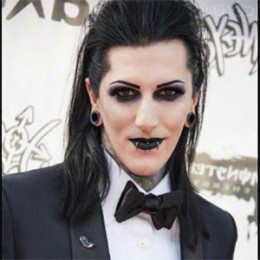 Primarily known as a heavy metal artist, Chris Motionless is the lead vocalist and guitarist of the American Gothic Metal band "Motionless in White". Back in 2005, his band was formed in his hometown. The star who was interested in music from an early age is successful to establish himself in the industry.

Besides, Chris is off the market. He is dating his Instagrammer girlfriend who is also a punk makeup artist.

As per some sources, Chris is dating an Instagrammer named, Gaiapatra. His girlfriend is a punk makeup artist. She showcased her talent via her Instagram.

Arrived home last night from a quick trip traveling to London, Berlin, and Stockholm. Did some interviews, met some fans, and got to be a tourist with @gaiapatra. Can't wait for all the European shows we have starting in June!!

The girlfriend-boyfriend couple often spends their time together. Previously, Chris dated Sabrina Malfoy in 2013 but they broke up soon.

Chris Motionless has an estimated net worth of around $2 million. He makes his money from his singing career.

Motionless is successful to sell his albums in a massive amount from where he is grabbing a huge amount. He is also earning from tours and concerts.

Chris Motionless was born Chris Cerulli on 17th October 1986 in Scranton, Pennsylvania. He grew up with parents who argued a lot and they eventually got divorced.

Chris, moreover, joined his six-member band Motionless in White in 2005. The band first released the singles such as "Puppets (The First Snow)" and "Ghost in the Mirror." The band was in low point around 2011 when they fired guitarist TJ Bell.

His band "Motionless in White" is mainly known as a mixture of gothic metal, metalcore, and industrial metal. They are also often referred to as horror metal. They rose into fame after the album "Infamous".

They completed their first UK tour in 2013 with The Defiled and Glamour of the Kill. Chris also performed along with his band at the 2013 Mayhem Festival. He has been working with an outstanding vocal fry as a lead vocalist since 2005.